On April 25, 2015, the ground shook violently taking down scores of lives as well as destroying historical and religious monuments. Among the 753 monuments collapsed or destroyed, one was Ranipokhari, a historic temple at the heart of Kathmandu.

Ranipokhari (Nhu Pukhu) was constructed by King Pratap Malla in 1670 to mourn the death of his youngest son and console his wife. It had a temple at the centre that was in the Granthakut model. But, it collapsed in the 1934 earthquake and then Prime Minister Juddha Shamsher Rana reconstructed the monument in the Gumbaz style, a common architecture design during the Rana regime.

But, the 2015 earthquake again shook it, requiring the reconstruction. Some months after the quake, authorities launched their efforts to resurrect the historical monument, hoping to complete it as soon as possible. However, it took five years for the pond to have a complete reconstruction thanks to its own shortcomings inviting many controversies.

Here, we explain a complete timeline of those controversies and how the historic monument got back its life.

Initially, Kathmandu Metropolitan City was given the responsibility to design, plan, and oversee the Ranipokhari reconstruction project. It designed a new blueprint, signed a contract with Worldwide Kandel KN KG JV for some Rs 62.9 million, and was set to begin the reconstruction process. But, it was not as easy as the officials had thought. 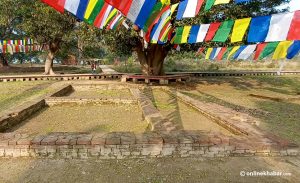