President Bidya Devi Bhandari, on behalf of the government of Nepal, on Friday presented the annual policy and programme for the next fiscal year 2020/21.

Here are some of the key promises made by the president today:

The president said making the country free of the coronavirus confection is the first priority of the government for the next year.  She added that the government was committed to ensuring that no one would die of the Covid-19 in coronavirus. Dozens of programmes have been announced to improve the public health system. In response to growing concerns over the incidents of border encroachment, the president said the government would make diplomatic efforts to reclaim the Kalapani region including Limpiyadhura and Lipulekh, and publish the new political map of the country accordingly.

The president said the government would begin the construction of Birgunj-Kathmandu and Rasuwagadhi-Kathmandu railway projects. If successful, the two ambitious projects would take the capital city closer to both of the immediate neighbours, India and China.

Use of Chinese ports The government would begin using seven ports for international trade as agreed with China last year, according to the president. Likewise, the government announced to carry out feasibility studies for opening additional cross points in Humla, Mustang, Sankhuwasabha and Taplejung districts for trade with China.

The president said the government would complete all activities related to the reconstruction of historical and archaeological monuments and private houses destroyed in the devastating 2015 earthquake.

The government also announced some initiatives to help the country’s economy recover its losses due to the global Covid-19 crisis. The president said the government would provide the seed capital to the youth who returned home from foreign employment. Likewise, the government assured providing some subsidies to the industries and enterprises affected by the crisis. Multiple programmes would be introduced to improve agricultural production. 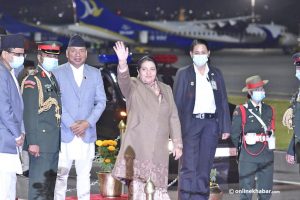 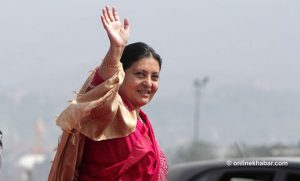