Two persons were killed in a landslide in Darchula on Sunday.

According to SP Mukesh Singh of Sudurpaschim Provincial Police Office, the duo were killed after the landslide occurred due to the incessant rainfall buried their house in the municipality.  Other members of the family are unhurt, he adds.

However, he informs that other people were reportedly injured in the same incident. 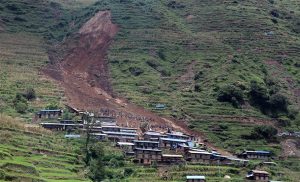