Xiaomi 12 Pro, the ultimate flagship product of the smartphone company Xiaomi, is finally here in Nepal. This is the best offering from Xiaomi smartphones to date.

Xiaomi has been providing decent and affordable smartphones in almost every category here in Nepal. Along with affordable pricing, Xiaomi also offers spectacular features, and that is the very reason why Xiaomi is rising as the no. 1 smartphone brand in the country.

Its latest release, Xiaomi 12 Pro has more than plenty to offer for its users. This phone has a slim and sleek design, a better camera module that houses a triple 50MP camera, a larger sensor on the camera, one of the best displays, quad speakers and most notably a superfast charger. Of course, there is some room for improvement too, but they get overshadowed by its other features.

These are only the highlights, let’s get into the details to know more about the phone.

Xiaomi 12 Pro features a very neat and elegant design. The phone has a glass back, glass front and an aluminium frame build. The front and the back of the phone has Gorilla Glass Victus protection. The phone also has curved sides.

On the back of the phone is the camera module. The main camera with the biggest sensor resides on the top and the camera has a shiny metal-looking ring around it. Under the main camera sensor lie the other two camera sensors along with a flashlight and 50MP branding. There is also Xiaomi 5G branding at the bottom left part of the back of the phone that exhibits the phone’s support for next-gen connectivity support.

The phone weighs around 205 grams and is 8.2mm thick. There is no official IP certification on the phone.

Xiaomi 12 Pro features a 6.73-inch LTPO AMOLED display with a resolution of 1,440*3,200 pixels in a 20:9 aspect ratio and a pixel density of 521ppi. There are so many features on the display itself. The display also supports an adaptable 120Hz refresh rate and a whopping 480Hz touch sampling rate. The display can also reach a peak brightness of up to 15,00 nits and supports both the Dolby Vision and HDR10+ features.

Xiaomi 12 Pro features a 50MP triple camera setup on the back and a single camera for taking selfies. All the cameras on the back are 50MP. Xiaomi has used a new Sony IMX707 sensor on its primary camera this time paired with a 24mm equivalent lens with an aperture of f/1.9. It also features Dual Pixel PDAF along with OIS for much faster focusing for action shots and better focusing in low-light environments.

The other two cameras on the phone are 50MP telephoto with a 48mm equivalent lens with 2x optical zoom. The third one is another 50MP ultrawide camera with a FOV of 115 degrees with an equivalent focal length of 14mm.

On the front, there is a 32MP selfie camera with an aperture of f/2.5.

Xiaomi 12 Pro runs on the latest Android 12 with MIUI 13 on top. The phone is powered by Qualcomm Snapdragon 8 Gen 1 (4nm) chipset and features an octa-core CPU with one Cortex-X2 prime core and integrated 5G modem. The graphics, meanwhile, are handled by the powerful Adreno 730. This is the latest and most powerful smartphone chipset from the reputed company, Qualcomm, and can be seen in the flagship smartphones like Samsung S22 and OnePlus 10 Pro.

This can be a great device for multitasking or even heavy gaming; the user does not have to worry about over-heating. The phone features a cooling system as well. The cooling system features an ultra-thin 2900mm² super-big vapour chamber along with three layers of massive graphite sheets to effectively reduce the core temperature.

Xiaomi 12 Pro comes with either 8GB or 12GB of LPDDR5 RAM with 256GB of internal storage. There is no option for expanding the memory through an external source.

Xiaomi 12 Pro features a smaller 4600mAh non-removable li-po battery. An amazing feature of the phone is its 120W superfast charging feature. This is by far the fastest charger available in the market. This superfast charger can get the phone fully charged in just 18 minutes. While with only seven minutes of charge, you can get the battery backup for a full day.

The phone also supports 50W fast wireless charging and 10W reverse charging. Even through wireless charging, Xiaomi 12 Pro is said to get fully charged in just 42 minutes and with a 4nm process, the power usage should be really efficient. The company claims there are 42 safety features including Xiaomi adaptive charge. This feature learns daily charging routines during the night time and the charging is said to pause at 80% while the user is asleep, but get fully charged right before the start of the new day.

Xiaomi 12 Pro supports dual 5G sim cards, Bluetooth 5.2, Wifi 6 and is NFC enabled. The phone uses USB Type-C 2.0 cable. For audio, the phone features quad stereo speakers powered by Harman Kardon. The phone does not have a 3.5mm headphone jack, as none of the flagships does these days.

Xiaomi 12 Pro offers a pleasing design and probably one of the best displays on a smartphone. The viewing and hearing experience on the phone may be astounding as the phone offers multiple video and audio features. There is also said to be a huge improvement in the camera performance as the photos and videos clicked even during night times bring out good results.

Xiaomi 12 Pro features a powerful chipset that should handle multitasking and intensive gaming with ease. On top of that, it features a cooling system. An amazing improvement and upgrade on the phone is the fast charging. It has the fastest charging system a smartphone can have right now in the market. The user does not have to worry about the battery anymore as just a couple of minutes of charging can provide you with power for a whole day.

While Xiaomi 12 Pro provides some amazing features it also has some areas where it could have done better. The 50MP ultrawide camera has only got 115 degrees POV; even Samsung’s mid-range provides a 123-degree FOV while the OnePlus 10 Pro has 155 degrees FOV. The telephoto lens also only offers 2x optical zoom. The video can be recorded in 8K resolution, but it is barely used as it can take huge storage. It would have been really great if there was the option of recording 4K resolution videos in 120fps. The 60fps offered on the phone is very basic. Also, there is no 4K video recording from the front camera.

Though it features a power-efficient chipset, a better battery backup would have been really appreciable. Also, there is no official IP rating on a flagship phone, and this is really discouraging and surprising at the same time. There are some ups and downs on the phone, but it indeed is a great phone to have.

So, we will know in the coming days if people will choose Xiaomi 12 Pro over the Samsung S22 series and the OnePlus 10 Pro or not. 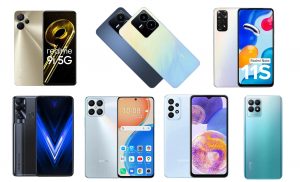