Android 12 will run your new phones in Nepal from now onwards. What’s the revolution it’s bringing? Android provides a rich application framework that allows building innovative apps and games for mobile devices. Android 12 meanwhile has brought a lot of interesting features for the users. It is said to have provided the biggest visual redesign yet from Google. This is the biggest upgrade from one generation to another. It has introduced ‘Material You’ and is focused on three major things: personal, safe and effortless experience. Let’s get into the details about what they mean, in the context of the Nepali users.

There are lots of upgrades on the personal features on Android 12, allowing the users to transform their smartphone according to their preferences.

Some of the most notable personal features include:

Android 12 is said to be the most personal OS from Google ever. It features dynamic colour capabilities, which means it can transform your experience based on your wallpaper. It can extract colours from your wallpaper and use them to theme your OS. The colour changes take place all over the OS, including the settings, quick settings tiles, and any app with the Material You support. On Pixel devices, the examples include the dialer, contacts app, and even calculator. It even works with widgets as well. Users can override the colour extraction and choose a colour if they want to.

The UI now is said to be more responsive and expressive. With improved system performance, the swipe and scrolls will be responding quickly and expressively with new motion and animations.

Android 12 has been designed to be even more accessible with new visibility features, including:

Safety has always been an issue while using different apps and games. The users are always in constant dilemma about the use of third-party apps over safety issues. The users are more likely to be unaware of the use of cameras and microphones by the apps they are using. Keeping this in mind, Android 12 has been designed for the safety of the users. The new easy-to-use, powerful privacy features will allow the users to have more control over who can see their data and when.

Some of the notable safety features include:

Most of the users are already familiar with apps requesting their location for use. The user had no option but to provide their exact location in order to use the app. But, with Android 12, the user can choose between giving apps access to their precise location or an approximate location instead.

This feature will provide the users with a clear and comprehensive view of when apps have accessed their location, camera or mic over the past 24 hours. The users will now have the option to manage permission right from the dashboard if they are uncomfortable with any apps using their information.

This is a first-of-its-kind secure mobile environment that is isolated from the rest of the operating systems and user apps. Any information processed in the private compute core requires explicit user action before it can be shared with Google or any app or service, making the use more secure.

Android 12 will make the use of the smartphone easier and effortless. Not only the users can have their own design and have control over their security, but the users can also have hassle-free gaming and data transfer.

Some of the notable features include:

This is a new and unique feature of Android 12. Gone are the days when you would have to wait for the games to be fully downloaded to be able to play. With Android 12, the users can jump straight to gaming without needing to wait for the full download to finish. This feature will also provide a game mode for the users in which they can choose between richer gaming experiences and longer gaming sessions.

The users will have the option to extend their screenshots. Scrolling screenshots will allow the users to capture all the content on the page in one image.

With the new version of Android, the user can transfer all their data by connecting their old phone to a new one with a cable or shared WiFi connection. The user can even transfer their data from an iPhone.

So these are the major upgrades in the new Android 12. Other than this, there are also many other handy and updates like:

Other minor updates on the new version of Android includes one-handed mode, easier wifi sharing, rich content interstation, overview suggestions, app hibernation and gaming modes. The new update seems to have been heavily inspired by Samsung’s UI as Samsung users have already enjoyed most of the updates that are offered by the latest Android. 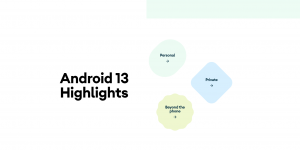