Minister: Some leaders told me not to arrest millers As an agitation launched by sugarcane farmers from various districts of southern Nepal has continued in Kathmandu on the fifth day, a minister says he is under pressure not to arrest the sugar mill operators that are yet to pay the farmers.

Industry Minister Lekh Raj Bhatta’s statement comes a few days after the government decided to arrest the millers owing to the continuous protest of the farmers.

Speaking in a meeting of the Industry, Commerce, and Consumer Interest Committee in Parliament on Thursday, the minister claimed political leaders who were actively advocating for the farmers on Twitter telephoned him and warned against arresting the industrialists.

He, however, did not reveal who told him not to arrest which miller.

The committee directed the government to ensure that the farmers are paid the dues within the next seven days.

Meanwhile, the farmers have reiterated that their movement will not end unless they are given the outstanding payments. 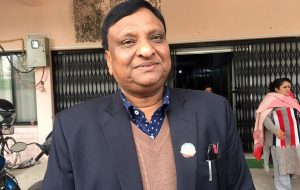