Despite deal with city, volunteers distribute food to needy at Khulamanch today also

Notwithstanding an agreement signed between the Kathmandu metropolitan city administration and various volunteering groups to discontinue free food distribution for the needy at Khulamanch from Tuesday, a group has distributed food today also.

Bimal Panta, the chairperson of Hamro Team Nepal, says his team distributed food as many people lined up expecting something to eat. He also adds that the team has not found any closed space to distribute food in a better way as suggested by the city government.

He states the volunteers made efforts to distributed food packets, but the needy lined up in the old way, hence the old way was retained.

Earlier on November 6, the two sides had agreed to discontinue the programme and shift it to closed spaces in consultation with the local governments for better management.

The agreement followed the city government’s decision to bar the volunteers from distributing food at Khulamanch, arguing it tarnished the city’s image. The volunteers were initially reluctant to stop the campaign saying the people should not be left hungry without a better option.

However, they had submitted themselves after Kathmandu Mayor Bidya Sundar Shakya offered to use empty party venues to distribute food. 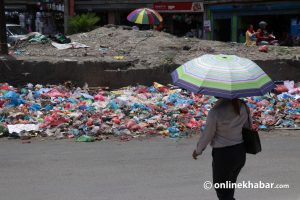