When his contemporaries are enjoying their retirement with their engagements with grandchildren, Batsa Gopal Vaidya at 81 is still picking up his paintbrush and doing exhibitions with his new and old paintings. He is one of the few artists who draw their motivation from the traditions and culture, and this enables him to stand out.

Active for more than 50 years now, Vaidya identifies himself as a painter. He has enjoyed his art career so far and feels it is a respectable job where they sell their skill and art, with honesty and truth.

With his experience in the field until now, Batsa Gopal Vaidya believes art is something that should not be done in haste, and for an artist, doing more exhibitions should not be the way of work. He wishes all Nepali artists to practise art with patience and effort and take the Nepali art scene to an international status.

He was also one of the pioneers of Sirjana Art Gallery, which eventually became Sirjana College of Fine Arts in Kamaladi in 2001, and he taught art in Sirjana till 2016/17.

When Batsa Gopal Vaidya initially started working as an artist, there were no art galleries in Nepal except Prithvi Art Gallery.

Vaidya’s journey towards being an artist began when he chose drawing as his optional subject in grade eight at Patan High School in the early 1960s. About his aspiration to become an artist, he says, “I was inspired by Dil Bahadur Chitrakar, a drawing teacher from Durbar High School. And, being interested to create art like him, I then took drawing as my optional subject.”

When the Nepali art scenario was taking its initial flight for revolutionising the modern art scenario, a few artists got a chance to go to India to acquire degrees in art in King Mahendra’s initiative and Batsa Gopal Vaidya was one of the early talents. Before and with him, many of the veterans and household names of the art field known today–Madan Chitrakar, Krishna Manandhar,  Govinda Dangol, Manish Lal Shrestha, et cetera–also got an opportunity to study at Sir JJ School of Art with a scholarship.

Vaidya feels it was luck that got him to be in such a mixture of talents and be acquainted with the gems like the late Rama Nanda (RN) Joshi, Shashi Bikram Shah, and late Indra Pradhan.

“It was pure luck. The first time I heard about the scholarship was on the last day of the application window; I missed the deadline. Just when I thought that I had missed the opportunity, I heard that the deadline had been extended, so I applied,” an excited Batsa Gopal Vaidya shares, “I was attending my brother’s bratabandha —coming of age ceremony— but upon hearing that I was shortlisted, I rushed to Singha Durbar to apply for the school, gave my interview and I got into the school.”

With that, he also got the new opportunity to pick up a brush. “Before studying in India, I used to do simple drawings. I did not have any official training in paintings. But there, I learned a multi-faceted genre of art and learned about new techniques. There I did charcoal drawings or sketches and started doing oil paintings.”

Upon completion of his degree in India, Batsa Gopal Vaidya landed on one of the biggest one-man shows in 1971. It was also the time when he first joined SKIB, a popular group of four artists named with their initials that held many exhibitions over the years while creating their portfolios. “Shashi  Bikram Shah, Krishna Manandhar, Indra Pradhan, and I got acquainted with them during the course in India. Just after the completion of the degree, we did our first exhibition together at Nepal Academy of Fine Arts (NAFA) which was inaugurated by Queen Ratna Rajya Laxmi Shah on her birthday.”

“At that time Shashi Bikram Shah, Manuj Babu Mishra, and Bijay Thapa had just done a group exhibition. As late Indian actor, Dev Anand was shooting here in Nepal, he was invited to inaugurate that exhibition at NAFA,” Vaidya shares, “After that, I and Indra Pradhan also started talking about doing a group exhibition. After he agreed I talked to Krishna Manandhar and then he talked to Shashi sir.”

The group was held together for many years and did their collective show till 1995, just after Indra Pradhan’s untimely demise. To date, SKIB is still considered one of the most famous and successful groups in Nepal. Batsa Gopal Vaidya shares, “The four of us exhibited together, but we all had our own working style. After Indra Pradhan died, we did the last exhibition with his paintings. And, the group disbanded thereafter.”

Yet, Vaidya continued his individual artistic journey and has been doing many solo and group exhibitions. His latest exhibition is the ongoing Revisiting the Roots in a Modern Nuance. With this, he is sharing the stage with Shahi Bikram Shah and Indra Pradhan’s artworks after many years, once again.

Belonging to the Vaidya clan — Ayurvedic practitioners — from the Newa community, Batsa Gopal Vaidya too used to work for one, during his teenage years. There, he used to draw as instructed by a vaidya — ayurvedic doctor—and drawings were also an integral part of preparing medicines for treatments.

He adds, “The vaidya would make prescriptions that included making drawings on Nepali lokta paper that would be sealed inside copper or silver pendants with tantric mantras to treat different illnesses.”

This experience became Batsa Gopal Vaidya’s core inspiration for his style of art that incorporated his tradition and culture. Moreover, his way is a part of art therapy that has been practised for centuries in Nepal. In his career, he has made art pieces with the motif of a mantra to cure insomnia in people. It was awarded a gold medal in Bangladesh. Today, the painting is in NAFA’s collection.

Even today, he draws on the same experiences of traditional and Vedic practices in his paintings too, with the help of a collection of drawings and mantras from his father’s books written in Nepal Bhasa Lipi (Kutakshar Ranjana script). “I look at the drawings and their meanings written in the books and then draw the same in my artworks. They do not contain mantras, just the drawings.”

Batsa Gopal Vaidya, as a painter, first turns yantra and tantric practices for healing and medical practices on bhojpatra (tree barks) and then turns all the drawings into paintings. “The art is all line and B&W, but I add my own colours to the drawings and experiment with techniques like drawing, embossing, printmaking, and woodcuts as well as in semi-abstract and oil painting forms.”

Batsa Gopal Vaidya works on themes of tantric and mythological ideas and stories. Recently, he has been working exclusively on his dancing Ganesh series. 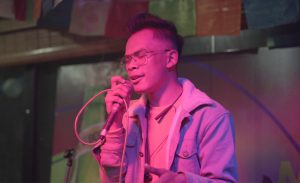 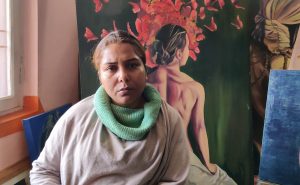