The Nepali team came out second in the ‘task’ of the 42.7 kilometres cross-country event under the World Cup qualification competition held here on Thursday.

The championship had kicked off on February 23. Championship director Bimal Adhikari said the competition was affected for three days before this due to bad weather.

Korea are leading the team event with 20 points while Nepal stand in the second position with 17 points. Nepal’s another team, The Team Everest, took the third place with 13 points.

The competitors had taken off from Sarangkot and landed at Khapaudi after flying to various places of Pokhara. 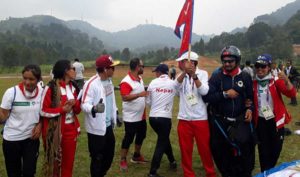