Every New Year, we never run out of some clichéd resolutions about improving self. Even though this may appear overrated to many people, many cultures around the world celebrate the idea of self-improvement. In Nepal too, the Newars welcome their new year called ‘Nepal Sambat’ by worshipping themselves. If you have been to Basantapur during the celebration of the Nhu Dan (New Year), you know for sure that it is nothing but grand and ostentatious like all other culturally rich Newari festivals. Newar ladies clad in traditional black and red Hakupatasi flood the squares of Basantapur and somewhere men play Dhime, producing sounds that fill the entire place with clamour.

However, the pivot of the Nhu Dan is ‘Mha Puja’, an annual ritual of worshipping oneself literally as ‘mha’ means self. As strange as it may sound, it stems from the belief that God resides everywhere even inside us. But the purpose of celebrating the festival in the New Year is mainly to purify oneself from the transgressions of the past year and to welcome the new year with optimism, and hope for prosperity and good health. It coincides on the 4th day of Tihar, a day before Bhaitika.

The ritual that is performed in the twilight with glittering diyos in the background is nothing but ethereal. Some families determine the auspicious time for worship after consulting astrologers and priests. Few communities among Newars perform it in the mornings often accompanied with a rigorous fast.

The stage of Mha Puja is a carefully depicted and metaphorical. The Mandal, often handmade, depicts three, seven or nine elements. Ideally, the Mandal must have nine pictorial depictions; Nag’s reflection, lotus, silk flag, Amrit (elixir) , a pair of fish, an umbrella and a left-sided shankha (conch). Although we might not glance twice to inquire what these symbols used from the ancient time mean, they do carry great significance.

This pursuit led me to question the priest of Golden Temple, Deepak Gurju, who unlocked the hidden meaning of these symbols. For instance, Nag’s reflection is believed to be more precious than a diamond and it is important for people to ward off diseases. Just like a lotus blooms away from dirt, the depiction of flower in the Mandal is meant to make people grow away from ills. It is believed that just looking at it invites good luck. Even the Sagun given at the end of the puja is profoundly symbolical. Usually people are handed with a basket containing boiled fried eggs and fish. Symbolically they are opposites. Fish are the dominant creatures of water whereas eggs are origins of birds which are creatures of the sky. By giving these as Sagun, the eldest woman of the family means to hope for the ultimate acquisition of wisdom.

The priest also expresses concerns over the manner in which Mha Puja has been celebrated, often derailing from its originality. Even in small instances such as using the red mud instead of cow dung in the Mandal, it goes on to show that people in the cities rarely have the means, nor the time to capture the true authenticity of these traditions. In the time of his grandparents, people used to follow all the nine symbols and seven elements in the Mandal, but nowadays people hardly put three elements in their Mandal; namely brown rice, paddy and lavah (fried paddy) signifying an appeal for a prolonged life, satisfaction in everyday life and knowledge. 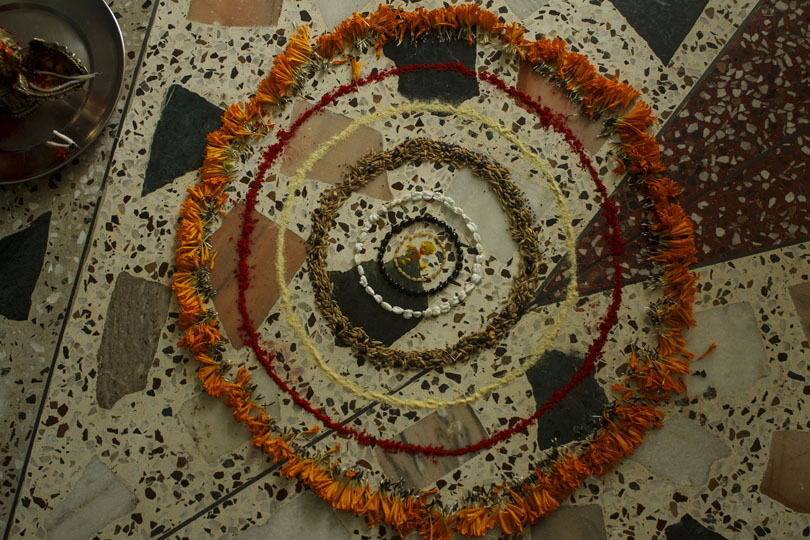 He goes on to add humour in the situation by saying that people have already started replacing the iconic aflame panas (that signifies the life-line of an individual) during the Mha Puja to more artificial wax candles.

Even though changes may have marred its originality, the spirit of the tradition has not been diminished. Often celebrated the next evening after Laxmi Puja, the result is a beautiful cultural fusion wherein Mha Puja respects the lingering presence of Laxmi from the previous day.  It is evident in the way people worship a broom, a jar filled with water and a Nanglo, regarded as the symbols of Laxmi. Newars eagerly wait for this festival and celebrate it with grandeur. Nhu Dan is that time of the year when people reflect on their life including its achievements and shortcomings, yet grow hopeful for a better one.