The rumour about an explosive planted at the Supreme Court has turned out to be a hoax.

A disposal team from the Nepali Army carried out a search, but found nothing.

Earlier, it was reported that Co-registrar Narayan Panthi had received a call earlier today that the explosive was planted.

Following that, the justices and staff were evacuated.

A rumour that an explosive has been planted at the Supreme Court premises has forced the court administration to halt hearing at all benches on Tuesday afternoon.

It has been learned that Co-registrar Narayan Panthi had received a call earlier today about the threat.

Meanwhile, a bomb disposal team of Nepali Army has gone to the court for further investigation.

All justices, staff and other people have been evacuated.

The administration says all administrative and judicial functions have been postponed for today. 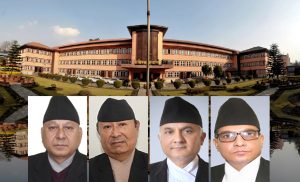