Bimala Oli, a member of the Lumbini Provincial Assembly representing the CPN-Maoist Centre, has filed a complaint with the police claiming former chief minister and CPN-UML leader Shankar Pokhrel abducted and held her hostage.

Pokhrel filed the complaint against Pokhrel and three other UML leaders at the Rupandehi District Police Office in Butwal on Tuesday. She has claimed the UML leaders abducted her from her house in Dang and took her hostage from July 30 for five days in Butwal.

Oli, who had defected to the CPN-Maoist Centre from Pokhrel’s CPN-UML in May, had claimed in the first week of August that Pokhrel and his team kept her inside the CM’s residence to stop her from participating in efforts to remove Pokhrel from his position.

The Rupandehi DPO chief SP Manoj KC says he has forwarded the case to the DPO in Dang as the incident originated in the Dang district. Dang police chief Suresh Kaphle says he is yet to receive the correspondence.

Oli says she was not in a mood to take this case to the police but later changed her mind after the UML tried to finish her politics. 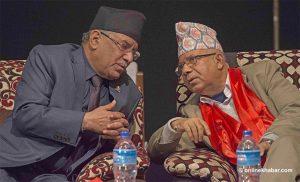