Former CIAA chief Deep Basnyat being taken to Dillibajaar Prison as the Special Court decides to send him to judicial custody for his alleged role in Balutar land scam, in Kathmandu, on Sunday, December 13, 2020. Photo: Bikas Shrestha

The Special Court has sent to judicial custody Deep Kumar Basnyat, a former chief of the constitutional anti-corruption body, Commission for the Investigation of Abuse of Authority, until the final verdict on one of the biggest corruption cases of current times.

A bench of the court’s chairman Prem Raj Karki and judges Abdul Ajij Musalman and Nityananda Pandel issued the order to keep him in custody on late Sunday afternoon. Following the order, police took him to the Dillibajaar Prison.

The court’s deputy registrar Pushpa Raj Pandey says the court has recorded statements from 97 of 175 persons accused of their involvement in the case. Of them, only two have been sent to custody for investigation, and others have been released. 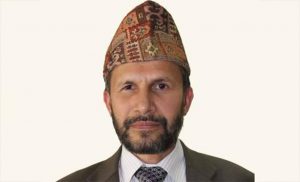