Sajha Yatayat has brought three new electric buses to Nepal to operate in the Kathmandu valley.

The cooperative is bringing 40 new buses, but in the first phase, three of them have arrived at the Tatopani customs point.

Sajha Yatayat says 37 other electric buses will be brought once the three buses are tested on Kathmandu roads.

These buses are made by a Chinese company named CHTC. The company has customised these buses to suit the demand of Nepali roads. TheeGo, the company that sells CHTC vehicles in Nepal, says the three vehicles have arrived in Nepal after their gradability tests.

A bus costs around Rs 15 million as Sajha is spending Rs 610 million for 40 buses. The buses are equipped with wifi networks, TV display and CCTV facilities. 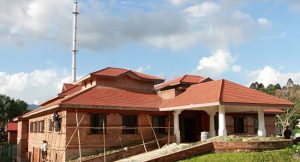