On Thursday last week, the Nepal Motion Picture Association declared to close cinema halls across the country on Monday, as a form of protest. The planned closure was reportedly a symbolic protest against the decision announced by the Film Producers’ Association to release new films only on Fridays.

Whereas the closure did not materialise due to negotiations held after that, Nepali film industry stakeholders are still at odds over different issues. This has affected the entire industry as everyone is left with their own complaints.

But, how did the Nepali film industry reach here? It is not just one simple thing. Here is an overview of the whole issue.

Last Friday, the Nepali film Ainaa Jhyal Ko Putali and the Indian films Brahmastra and Sita Ramam were slotted for release. Before any movie release, the cinema halls begin advance bookings that start at least a few days early. But, last Friday, advance bookings were not open because of a delay in the clearance of the two aforementioned Hindi films. This impacted the footfall of Ainaa Jhyal Ko Putali, the protesting sides claim.

On Friday, they expressed their concerns over the delay in advance bookings, that too because of the delay in clearing the censorship for Brahmastra on time. Their argument was that Nepali films should get equal exposure for business and priority from the halls and the censorship board like foreign movies.

Given the delay, the filmmakers are also complaining about the fact that the Nepali film did not get a slot even till the late evening of Thursday. With no slots and no advance booking, Ainaa Jhyal Ko Putali suffered a lot.

The film’s director Sujit Bidari took it to social media to share how the hall had not given show time to the film a day before the screening, showing the multiplexes’ biases.

Meanwhile, the Film Development Board’s Information Officer Chiranjibi Guragain says the delay was caused because of the late submission of documents by Station Five and DCN, the distributors of Brahmastra in Nepal. The board claims all it did was wait for the papers, and the payment; there were no sides taken.

But, behind the Nepali film industry suffering, the cinema halls are also being accused of choosing a side of foreign movies. And, it is not a new or baseless accusation.

When the censorship was delayed, the Nepali film industry players requested the cinema halls to not wait for the Indian films and to assign slots as well as open advance bookings for the censored content from Nepal. However, the halls were in favour of waiting and opening the tickets for all the shows at once.

While smaller halls assigned a few slots for the Ainaa Jhyal Ko Putali, Team Quest (QFX Cinemas) did not heed the request. It instead said it would have opened the advance bookings by Wednesday as always, but the board troubled them by delaying the censorship. It accused that even when the documents of the Hindi film were handed over, the board delayed the censorship on various pretexts.

Hence, director Dipendra K Khanal says it became clear that even after completing all the procedures, the Nepali films being stopped for bookings is not fair and the treatment was as second-class.

Meanwhile, though QFX said the delay was the reason at first, the cinema halls’ biases against the Nepali film industry were still evident when the films got the clearance. QFX gave 57 shows to Brahmastra and just 11 shows to Ainaa Jhyal Ko Putali on its first day of release. Another Nepali film Gurkha: Beneath the Bravery was given only eight shows.

In the past also, similar biases against the Nepali film industry were visible.

Producer and actor Deepak Raj Giri has been accusing the theatre owners of neglecting the Nepali film industry since the production of his first film in the Chhakka Panja series and during the release of Chha Maya Chhapakkai.

December-release Chapali Height 3 had to reschedule its release dates twice, once to avoid clashing with the Hollywood movie Spiderman: No Way Home and the Bollywood movie Pushpa. With the already feeble film market, the Nepali producers or the cinema halls could not be confident of the Nepali film industry doing well against the two big-budgeted and star-studded foreign projects.

Surely, the Nepali film industry is yet to reach the point where it can outrightly compete with international counterparts, be it Bollywood or Hollywood. But, rather than accepting its flaws and working on the lapses, the cinema stars, producers and makers have been going after foreign films instead.

At a time, the Nepali film industry introduced a rule that two Nepali films should maintain at least two weeks of the gap between their releases. If they cannot even compete with each other, when will they have the confidence to compete with the likes of big-budget Bollywood and Hollywood movies, without thrashing them for their success?

Spiderman: No Way Home and RRR collected millions from the first week of their release, while it is hard for a majority of Nepali films to create that level of buzz and translate it into box office collections.

The growing craze and worldwide success of South Indian films further made the Nepali film industry more insecure. And ultimately, Nepali filmmakers ended up demanding a ban on foreign films (Hindi-dubbed movies) so that they will get traction. But, they never realised that the flaw was in their films, and not the competition.

There are no discussions about how to create new stories and unique plotlines, attract the audience, or how to keep the producers in profit and force the audience to keep coming back solely based on their capability. But, progress seems to be a long wait.

When done right, Nepali moviegoers do show up, as seen in the first-day turnout of Kabaddi-4 and Kathaputali. Even now Ainaa Jhyal Ko Putali is receiving a lot of love and appreciation from people from all walks of life.

It is high time Nepali moviemakers started questioning themselves first and making corrections if they want Nepali films to create their own space and get the audience not out of pity or sympathy, not in the name of the country or patriotism, but for pure content. 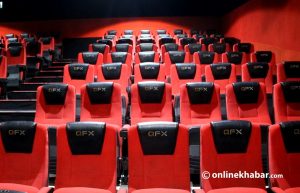 Cinema halls across the country to close on Monday