Comedies sell in Nepal. This is evident from the significant presence of comic actors even in ‘serious’ movies. When comedians themselves make a movie, it is a different ball game. The latest release, Chhakka Panja 3, has a potential to attract a diverse group of spectators.

Established comedians Deepak Raj Giri and Deepa Shree Niraula have made sincere efforts to make their audience laugh for around two-and-half hours. Though there are some flaws in the story, which takes up some ‘serious’ issues prevalent in Nepal, the movie is successful in meeting its objective of giving the audience ‘a complete fun package’ during this festive season.

The real world of ironies and its exaggerated mockery

The movie is not only a plain farce but also a satire on multiple ironies of the Nepali society. A government-run secondary school in a semi-developed village in western Nepal is at the centre of the film. The school is an amalgamation of mismatches: the principal is unable to make his staff work, the teachers spend most of the afternoons playing cards or working as land brokers. The school also works as a party venue for aristocrats of the village. Local leaders have made the school management committee a playground where they compete against each other to get hold of the villagers’ votes. A nearby private school, operated by close kin of the leaders, deploys its resources to perpetuate the crisis.

Consequently, the students are at the receiving end. Most of them fail final secondary examinations. Many of them drop out. Those who wish to learn well complain to the authorities, who do not pay any heed, because they are also puppets of corrupt political leaders.

The situation is realistic, but the movie presents them in an exaggerated way. The exaggeration is intentional because it wants the audience to laugh at the situation. Overstatements and understatements are most useful tools to communicate irony, and both the tools are well mobilised by witty dialogues of funny characters. Giri’s screenplay and Niraula’s direction match well to present the mismatches effectively.

When the team released Chhakka Panja 2 around the same season last year, it triggered an interesting debate in Nepali academia and the press. Many critics said the movie is overtly sexist and it objectifies women. Most of the charges were true because the dialogues were disrespectful and insulting; the roles given to women were subordinate and submissive.

The third project of the sequel, however, has been successful in freeing itself from the charge. Rather, it empowers women. In a closer analysis, this is the heroine, not the hero, who moves the story forward. The hero is named Raja, but he cannot rule his empire. His name turns to become a part of the ironic world the movie presents.

The lead actress, obviously, is a change maker and the movie is a celebration of her success. It is most clearly evident at the end when the lead, played by Deepika Prasain, inspires her husband (in 30s or early 40s?), played by Deepak Raj Giri, to return to school so that he can improve his standard of life.

There is another superwoman in the movie. It is Raja’s mom, played by veteran actress Laxmi Giri. Her physical appearance, confidence and dialogue delivery collectively makes her the most dominating character in the movie. Perhaps, she is also the most ideal character, and the film implicitly endorses her ideas.

Perhaps, the biggest flaw of the project is the choice of its theme and setting. Politicisation of government schools and a disparity created due to it are chronic problems of the country. Their impacts are immensely dangerous, and only sincere efforts from the political leadership can resolve the problem. The movie has presented these issues as something trivial. Such mishandling may backfire on the movie itself—the movie has become a laughing stock itself in its failure to understand the gravity of the situation.

Further, the story loses its focus, especially in the second half. For example, Bangdel Dai, played by Shishir Bangdel, who represents the opposition group in the village, being mobilised by the people of Kaji, played by Neer Shah, to promote his agenda in the school seems like a forceful addition to lengthen the runtime. This section is neither necessary nor probabilistic. It does not it give any fun to the audience.

The movie also tries to raise its voice about intercaste marriage. But, it is not well articulated.

Other elements of the making

The camerawork is impressive because there is a proper balance between close shots and wide shots. There isn’t any serious problem with the editing.

Dialogues are effectively delivered. They are short and conversational, and clearly articulate the message. The narrative voice of Bangdel, which appears after around every 30 minutes, unifies the movie into the single story. Otherwise, members of the audience are liable to forget the subplots as the movie moves forward. The movie has more than one dozen characters and a number of subplots.

Deepak Raj Giri and Laxmi Giri speak in a regional dialect. It gives an impression of localness. However, other characters do not have similar vocabularies and accents. This is an easily noticeable technical flaw in the movie. Further, a minor character, Kamali, has a completely different accent. Logically, such linguistic diversity is not possible in a village that the movie is set in.

Another error is associated with ethnic diversity in society. Apparently, members of multiple ethnic groups reside in the same village, and the movie effectively presents that. However, a Bahun, who is a priest by profession, having lunch together with Chhetris, Tamangs, Bangdels, and even dalits is not yet a reality in rural Nepal. The movie presents it quite naturally, and it becomes something unnatural for critics.

Festivals are for fun, family, and friends. For this Dashain, the Nepali cinema industry has got a movie that people of different age groups and those from different socioeconomic and cultural backgrounds can watch together and have fun. No one regrets watching it. 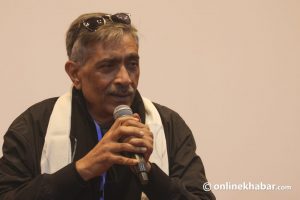 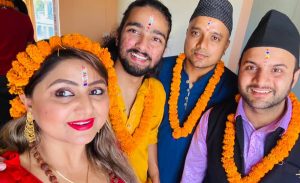 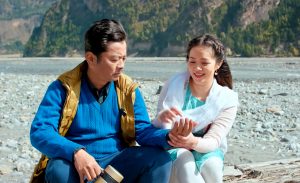