Police in Hetaunda of the Makawanpur district have arrested a woman on the charge of murdering her husband.

Police claim Anita BK (41) beat her husband, Mitra Lal Sunar (43), up during a dispute between them on Tuesday evening.

Seriously injured in the fight, Sunar breathed his last during treatment at the Hetaunda Hospital, according to DSP Jayeshwar Rimal, the spokesperson of the Makwanpur District Police Office. 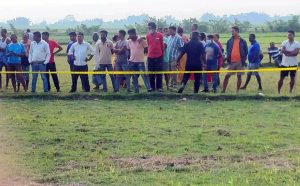