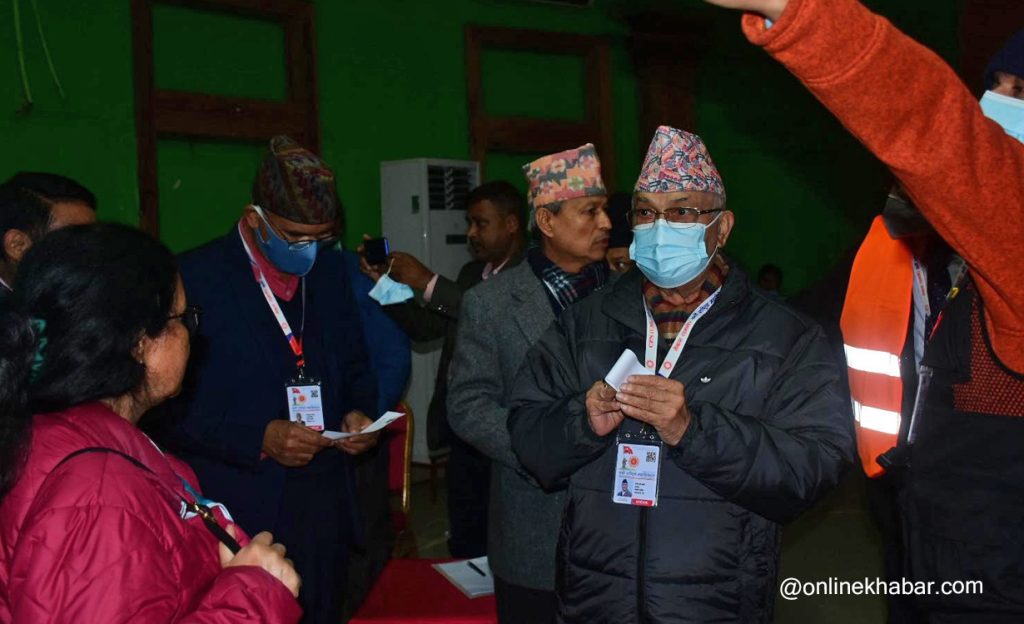 KP Sharma Oli casts his votes during the 10th general convention of the CPN-UML, in Chitwan, on Tuesday, November 30, 2021. The convention reelected him as the party chairman.

The 10th general convention of the CPN-UML, the biggest political party of the country, has reelected KP Sharma Oli as its chairman for the next four years.

During the election held on Tuesday, Oli defeated his sole opponent, Bhim Rawal. A member of the election committee says Oli received 1,837 votes against Rawal’s 223.

The election result, however, was almost certain as Oli has emerged as a towering figure in the party whereas Rawal has lost his power with the party split as most of the leaders close to him defected to the newly established CPN-Unified Socialist. Rawal himself was a close confidant of Madhav Kumar Nepal, the chairman of the new party, before the split.

The general convention that began on Friday was expected to conclude on Sunday. However, it had got delayed thanks to Oli’s bid to get himself elected unopposed.

The convention is ending today with the oath-taking and the first meeting of the newly elected central committee.

The convention has already elected Ishwar Pokharel as the senior vice-chairperson unopposed.

Meanwhile, Ghanashyam Bhusal has been defeated with just 725 votes.

The convention elected the following secretaries: