ICIMOD points at increased risk of GLOF in Nepal, lawmakers lambast government for not taking precautions

While rains continue to lash the country, triggering landslides and floods in the Hills and the Tarai, an international non-government organisation has warned about the possibility of glacial lake outburst floods (GLOF).

In a briefing to the parliamentary State Affairs Committee on Friday, ICIMOD explained that as earthquakes have weakened hilly areas of Nepal, there’s (increased) risk of landslides there. It also pointed at risk of glacial lake outbursts.

ICIMOD cautioned that 20 out of Nepal’s 2, 323 glacial lakes may burst. It cautioned about possbile catastrophies while presenting a working paper on the condition of the Himalayas and the risk of landslides in Nepal’s hilly areas.

After studying the document, SAC members said the government had not taken disaster management seriously.

“It’s raining, triggering landslides in places that suffered quakes last year. But the government is not taking all this seriously,” lawmaker Ganga Lal Tuladhar said. He said the government does not appear serious when it comes to saving people’s lives.

He said: Landslide has put the Chepang settlement at Ri VDC in Dhading in peril. But the government has not been able to rescue the locals trapped since yesterday.

Lawmaker Lal Bahadur Raut accused the government of doing vote politics by showing budget for reconstruction of disaster-hit houses instead of bothering to rebuild them at the earliest. He said: There’s increased risk of flooding in the Tarai. The government is not serious about this threat.

The committee decided to summon Home Minister Shakti Bahadur Basnet at its meeting next week and ask him questions about disaster preparedness. 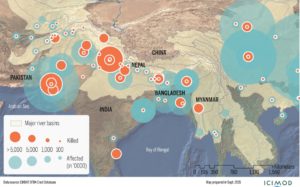 The Indus: A river of growing disasters