Explainer: How did UML and Maoist Centre arrive at ‘historic’ merger?

After the ‘historic’ party unification between CPN-UML and CPN-Maoist Centre this afternoon, the proposed ‘Nepal Communist Party’ will be the biggest political force of Nepal.

Here’s how the unification talks began.

On October 3 last year, while most Nepalis were busy celebrating the Dashain festival, the CPN-UML and CPN-Maoist Centre organised a press meet at Rastriya Sabha Griha to announce that they would form an alliance during elections to the House of Representative, the National Assembly and provincial assemblies. They also announced that they would merge after the completion of polls.

The presence of Naya Shakti Party Nepal coordinator Baburam Bhattarai was like a cherry on the cake at the event. Bhattarai, however, pulled out later after he could not agree with the CPN-Maoist Centre over distribution of constituencies for parliamentary polls.

The three parties, including Naya Shakti, had signed a six-point deal with a target to win two-thirds majority seats in the polls.

They also announced to issue a joint manifesto for the elections. A Party Unification Coordination Committee was formed to settle the differences through discussions and forge consensus for the merger.

The UML and the Maoist Centre reportedly tried to take federal Socialist Forum-Nepal aboard; but the Upendra Yadav-led Madhesh powerhouse denied due to the ‘communist’ tag in their ideology.

‘Taking a step ahead’

The UML and Maoist Centre jointly unveiled their election manifesto for the election to the House of Representatives and provincial assemblies. The manifesto made tall promises from railways to increasing the per capita income of Nepalis to US $5000 in the next 10 years to making Nepal a developed country by the next 25 years. The manifesto also gathered criticism from various other political parties for its ambitious nature.

Both the parties contested the elections on November 26 and December 7 with their respective party symbols and gathered nearly two-thirds majority in the Federal Parliament.

Then, the name was coined

With the Maoist Centre’s support, UML Chairman Oli commanded a majority in the House of Representatives and subsequently was appointed the Prime Minister on February 15.

Four days after the appointment, the two parties signed a seven-point agreement. As per the agreement, Marxism-Leninism will be the guiding principle of the party; the party would be named Nepal Communist Party; final call on the party ideology will be taken through general convention; standing committee, politburo, and central committee will be small.

After the agreement, the Maoist Centre also jointed the government.

The coalition partners informally agreed to reelect President Bidya Devi Bhandari and Vice President Nanda Bahadur Pun for the positions for the next five years, as they would represent the UML and the Maoist Centre respectively.

The two parties jointly command majority in six of seven provinces. Therefore, they also divided positions of six chief ministers and six provincial speakers. The UML got four of each whereas the Maoist Centre were left with two.
With the agreement, the partnership that was only limited to the centre spread across the country. 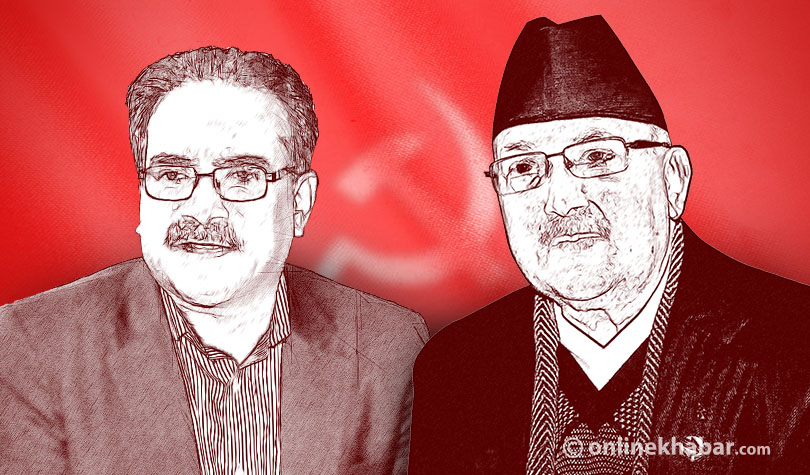 Then, the two parties prolonged their negotiations as they had different opinions about key issues of the unified party including election symbol, ratio of the parties in the organisational structure and mentioning of people’s war.

Finally, on May 7, there was the breakthrough as Oli agreed to remove the roadblock for the unification and as he decided to hand over the government leadership to Dahal for the last two years of his five-year tenure.

Dahal had demanded the premiership to be shared equally or take over the party leadership for five years. With the new agreement, the Maoist got 38 to 42 percent in the party structure. Other senior leaders of the CPN-UML Madhav Kumar Nepal and Jhala Nath Khanal had also consented Oli for these agreements.

Despite the agreement on premiership sharing, leaders of the two parties continued to express complaints against each other. Maoists leaders felt neglected by the government in key decisions and during Indian Prime Minister Narendra Modi’s visit to Nepal.

The issue was resolved on Wednesday after multiple rounds of discussions and meetings when the parties agreed to dissolve themselves and register the new Nepal Communist Party. 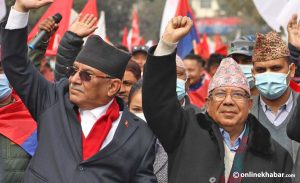