Many Nepali households are busying themselves planting and worshipping tulasi, also known as holy basil, in their yards Tuesday morning. They are preparing for the beginning of the four-month festival—Chaturmas.

This long festival sounds strange for the majority of the new generation in Nepal though it still holds significance in the lives of their predecessors. So what is it anyway?

Nawa Raj Ghimire, who teaches Puranas at Valmeeki Vidyapeeth, explains the Chaturmas is the holy period of four months from the day of Harishayini Ekadashi until Haribodhini Ekadashi every year. It is believed that Lord Vishnu sleeps and goes into a deep meditation, also acknowledged as Yog Nidra, according to him.

During the Chaturmas, no auspicious functions like weddings are performed as it is the time when gods and goddesses are not meant to be disturbed by their devotees. This is the time for penance, performing austerities, fasting and tenacities. Those who take the Chaturmas brata abstain from consuming specific food items marked ‘impure’, have only a single meal every day and fast on every Ekadashi each fortnight. They also worship tulasi through these months.

Hari Om Bidari, a priest, describes, “To please lord Vishnu and attain his blessings, various Puranas like Shrimad Bhagawat Mahapuran, Haribansa Purana and Shiva Purana are recited during this period. Vishnu mantras and hymns are chanted.”

The first day of the Chaturmas is called Harishayani Ekadashi; it is considered one of the most significant Ekadashis of the total 24 Ekadashis in a year in the lunar calendar.

Harishayani Ekadashi, also known as Devsayani Ekadashi, is celebrated on the eleventh day of the Shukla Paksha (waxing phase of the moon or the bright fortnight) in the month of Ashadh, the third month of the year as per the lunar calendar.

Ghimire says, “Harishayani is the combination of two words ‘Hari’, the other name of Lord Vishnu (the preserver) and ‘Shayani’ which means sleep. On this day, the lord, being exhausted from destroying demons and evils, goes to sleep in Ksheersagar (cosmic ocean of milk) on the Shesh Nag (cosmic serpent) for four months.”

“He wakes up on Haribodhini Ekadashi in the month of Kartik,” Ghimire adds, “Lord Vishnu right after two months of Harishayani Ekadashi changes his sleeping position and this day is observed as Haripariwartini Ekadashi.”

On the day of Harishayini Ekadashi, Hindu devotees wake up early in the morning, take a holy bath and worship Lord Vishnu, fasting for the entire day. They take vows, chant mantras, recite hymns and listen to religious stories.

Likewise, the devotees abstain from consuming grains, cereals, beans and certain vegetables and spices like garlic, tomato and onion. Also, they perform a ritual by planting and worshipping tulasi plants, sown on Nirjala Ekadashi, exactly one month before the Harishayini Ekadashi day, in front of or near their houses.

It is believed that those who observe fasting (brata) this day get rid of all their sins and the Lord grants them happiness, wisdom, sound health, peace and prosperity.

Each of the 24 Ekadashis has its own story on why the Ekadashi day is considered holy. Whereas all these 24 days are considered important, the two at the beginning and the end of the Chaturmas are additionally valued, according to priests. They observe that the devotees who fail to maintain fasting rules on other Ekadashis also fast on these two days.

Tulasi, also known as holy basil, plants are a part of every Hindu household in Nepal. Whereas the families worship them every day, the worship turns more special during the four months of the Chaturmas.

Ghimire explains, “Tulasi is valued both religiously and scientifically as Harishayani Ekadashi marks the commencement of both the rainy season and the Chaturmas. This time is the appropriate time to plant, grow as well as worship tulasi. The significance of tulasi as a medicinal herb is already proven.”

In every puja of Lord Vishnu, it is mandatory to offer the leaves of tulasi. This is why tulasi is planted on Harishayani Ekadashi and worshipped all these four months or the sleeping time of lord Vishnu until he wakes up on Haribodhini Ekadasi. 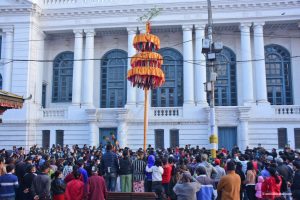