Buddha Krishna Baga Shrestha of Bode, Bhaktapur, is volunteering to get his tongue pierced for the ninth time this year as part of a famous tongue-piercing cultural festival in his town.

This festival is celebrated in Bode of Madhyapur Thimi municipality on the second day of the Nepali new year.

Shrestha, who works as an ambulance driver at the Nepal Korea Friendship Hospital for a long, says it will be the last time this year he will get his tongue pierced as part of a ritual associated with the festival.

“I will be piercing my tongue on April 15 this year for giving continuity to the festival. It will be my last. I won’t pierce my tongue from next year. It will be a problem also due to my age,” the 49-year-old explains.

Buddha Krishna Baga Shrestha says the young generation should now come forward to keep this tradition alive. “The younger-generation people should be ready to pierce their tongue to preserve this ritual. It should not be allowed to disappear,” he says. 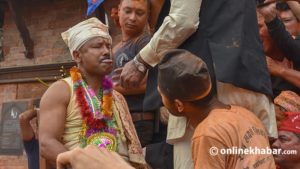 ‘I pierce my tongue, but I’m not a demon’