Today is July 29, a day dedicated to raising awareness in tiger conservation that has been named International Tiger Day. Among the 13 tiger range countries in the world,  Nepal is one of them.

As an effort to conserve this endangered species as listed on the Red List of Threatened Species published by the International Union for Conservation of Nature (IUCN), the government of Nepal has established five protected areas in the lowland of the country and carried out various other strategies and plans jointly with partner national and international agencies.

While celebrating this day, let’s know a little better about the history of tiger conservation efforts in Nepal in these six major points:

Before the 1950s, the southern plains of Terai used to be the safe haven for the abundance of tigers. But, following the fall of the Rana regime and the eradication of malaria during the mid-1950s, people from the mid-hills and hills began to migrate towards the lowland Terai on a large scale.

Then, there happened massive uncontrolled deforestation for human settlements, agricultural and infrastructure development, and unchecked hunting of wild animals causing tigers and some other mammals to nearly go extinct. And, the population of tigers decreased significantly during the 1960s and 1970s.

Considering the degrading population of tigers, the government of Nepal, in collaboration with the World Wildlife Fund (WWF) and the Smithsonian Institute launched the Tiger Ecology Project in Chitwan in 1972. This step is considered the first tiger conservation initiative in Nepal in order to carry out research on tigers and their prey species.

Subsequently, in the following year, the National Parks and  Wildlife Conservation Act 1973 was enacted. Accordingly, Chitwan National Park was established in the same year and the boundaries of the park were further extended to the current size of 932 square km in 1977. A network of protected areas for tigers was established.

Also, the Parsa Wildlife Reserve was declared as an extension to the CNP in 1976.  The units of the Nepal Army were deployed in the national parks and wildlife reserves for regular patrolling and supporting anti-poaching initiatives.

3. Community is made a part of tiger conservation in Nepal

In 1980, the government of Nepal established the Department of National Parks and Wildlife Conservation. Subsequently, Bardiya National Park and Shuklaphanta Wildlife Reserve were established. Until that time, the tiger conservation efforts were confined to managing and protecting the wildlife habitat only. This invited park-people conflict regarding forest-based resources and at the same time, made the stakeholders realise the role of community participation in tiger conservation.

Then, addressing its significance, the government of Nepal introduced the Buffer Zone Management Programme in 1996.  Subsequently, local communities participated actively in the management and conservation of the protected regions and adjoining buffer zones and, in return, they got a 30-50 per cent share of park incomes, that to be used in community development activities.

Nonetheless, the conflict between wildlife and people living around the protected areas takes place when the wildlife does any damage to their crops or domestic animals, and sometimes even to human life. Some affected people even resort to killing the wildlife despite strict legal provisions of punishment of up to 15 years of sentence in jail or a hefty fine of both as well as a compensation scheme for damage.

4. The country has a lot of action plans for tiger conservation

With an aim ‘to preserve, recognise, restore, and increase the effective land base that supports tigers and to maintain a viable tiger population in Nepal’, the Tiger Conservation Action Plan for Nepal was prepared for the first time in 1999. This five-year periodic plan was then revised in 2007 and thus developed and implemented as the Tiger Conservation Action Plan 2008-2012.

In between, a National Tiger Recovery Programme (NTRP) was also implemented in 2010 for five years under the framework of the Global Tiger Recovery Programme (2010- 2022). Again, the Tiger Conservation Action Plan for Nepal (2016-2020) was implemented with an aim to address the critical threats to tiger conservation that are rising such as poaching, illegal trade of wildlife, human-wildlife conflict, wildlife diseases, and invasive species and habitat loss with proper conservation strategies.

There were only about 120 tigers in Nepal as of 2009.  And, the tiger population almost doubled to 235 in the span of one decade. A census conducted by the Department of National Parks and Wildlife Conservation and other conservation groups such as Panthera and the Zoological Society of London (ZSL) revealed this figure, using images from camera traps. All these 235 wild Bengal tigers are distributed in five of the country’s national parks: Shuklaphanta, Bardiya, Banke, Chitwan, and Parsa.

6. Tigers are being treated as a part of cross-border metapopulation currently

For the long-term survival of tigers,  the joint ventures of the government and WWF have launched the Terai Arc Landscape (TAL) Programme in 2001. TAL is the tiger landscape or main tiger habitat expanded from the Bagmati river in the east to the Yamuna river of India in the west. The major goal of TAL is ‘to manage Nepal’s tigers as a metapopulation, by maintaining connectivity among the protected areas, including the protected areas in India.’ 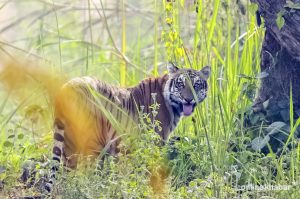 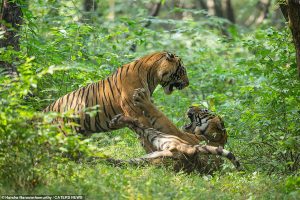