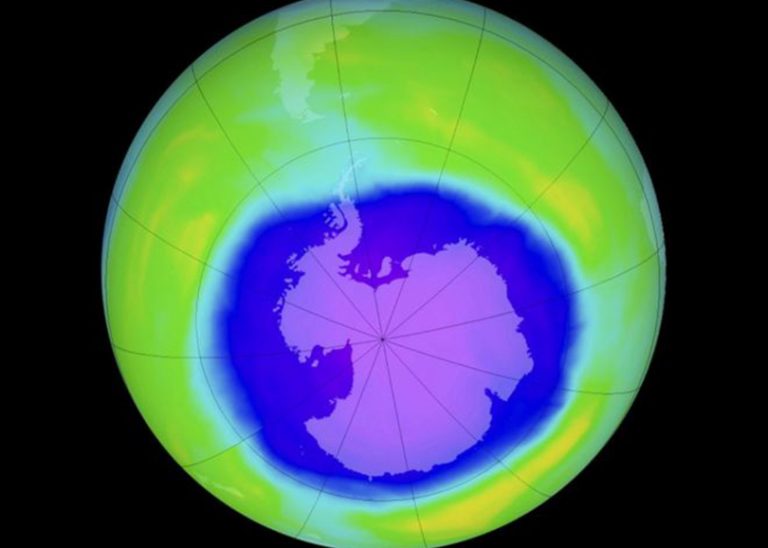 Ozone layer depletion (seen in blue) over the Antarctica region

Have you ever wondered about the fascinating reason why there is known life on earth only? Yes, it is because of oxygen, but not just the oxygen that you breathe, but also because of the oxygen that protects you from the sun. This oxygen settles and surrounds the earth in a thin layer and helps reduce harmful ultraviolet (UV-B) rays from reaching the earth’s surface making life possible on earth.

However, due to various reasons, including the urban lifestyle like that of Kathmandu, the ozone layer is depleting day by day. What is ozone layer depletion? What activities in Nepal are causing it? How can you contribute to preserving it?

On the occasion of International Day for the Preservation of the Ozone Layer, we discuss all of them today.

What is the ozone layer?

The ozone layer is a thin layer of the earth’s atmosphere with a relatively high concentration of ozone (made up of three oxygen molecules or O₃). This layer ranges from 15 to 35 km in the earth’s atmosphere, in the lower portion of the stratosphere. It absorbs most of the harmful UV-B rays and protects the earth from harmful rays. This layer also keeps the earth warm enough for humans to live a stable life, even during the night, by absorbing the infrared radiation emitted by the earth.

What is ozone layer depletion?

Ozone layer depletion refers to the gradual thinning of the ozone layer in the earth’s atmosphere. In the name of development, different industrial areas or factories and humans have been producing chemicals compounds releasing chlorine or bromine atoms that made the ozone layer thinner day by day. Ozone layer depletion results in the sun’s harmful UV-B radiation coming directly, which will be damaging human health as well as all other living things on earth.

For the awareness to protect the ozone layer, September 16 is marked as World Ozone Day, since 1995, following the UN General Assembly in 1994, commemorating the day when the Montreal Protocol was signed.  This year, the theme for International Day for the Preservation of the Ozone Layer 2021 is “ozone for life”.

What in Nepal is causing ozone layer depletion?

The presence of chlorofluorocarbons (CFCs), hydrofluorocarbon (HFCs) and other nitrogenous gases are the main causes of ozone layer depletion. Though nontoxic nonflammable chemicals, they react with the ozone layer and destroy it. For example, the CFCs react with the O3 and gives chlorine monoxide (ClO) and oxygen (O2). The molecules then linger in the atmosphere and capture more heat, causing the earth to warm up, like inside a greenhouse; hence the name. The reactive atoms of carbon, chlorine, and fluorine are commonly released by spray aerosols, refrigerators, solvents and air conditioners.

An increasing number of industries in Nepal is also contributing some amount of greenhouse gases.

The ozone layer has been found to be depleted by certain natural processes such as solar storms and stratospheric wind. But, they do not cause more than 1-2 per cent of the ozone layer depletion. Another factor that can deplete the ozone layer is volcanic eruptions. Nepal also does not have any volcanic mountains, which is why this factor is also negligible in the Nepali context.

Many researchers say the unregulated launching of rockets is a huge factor behind the depletion of the ozone layer. The soot and aluminium oxide from rocket fuel expedites ozone depletion. This is why it has been said, if the rocket launches are not controlled in time, it will result in a huge loss of ozone by 2050. But, as Nepal does not have launch pads and is only just starting to get into space research, Nepal is not contributing in this regard.

The depletion of the ozone layer, directly or indirectly, has a great impact on human beings and all humans are to blame for this too.

Human beings will be directly exposed to harmful UV-B radiation from the sun due to the depletion of the ozone layer. This can lead to serious health issues among humans, such as skin diseases, cancer, sunburns, cataract, quick ageing and weak immune system.

Strong ultraviolet rays may lead to minimal growth, flowering, photosynthesis in plants. Forests also have to bear the harmful effects of the UV-B rays. It also creates a disturbance in the water cycle process. Planktons are greatly affected by exposure to UV-B rays; though microscopic, they create a large impact on the earth’s ecosystem.

Solutions to save the ozone layer

So, there is a problem created by human beings. There must be a solution that can be solved by humans as well. In Nepal, this is what you can do:

Simply, you can reduce the use of such things that can deplete the ozone. Avoid refrigerators, fridges, air conditioners, fire extinguishers that have CFCs as much as you can.

Vehicles emit large amounts of greenhouse gases that lead to global warming as well as deplete the ozone layer. So, we should minimise the use of vehicles powered by fossil fuels. Nepal can surely make amendments and use more electric vehicles and make green cities.

Many cleaning products people use today have chemicals that release chlorine and bromine. These chemicals get released into the atmosphere and start depleting the ozone layer. This is why, to preserve the life-saving layer, one should opt to use substitute products with natural ingredients.

Nitrous oxide adversely affects the ozone layer. So, people should be made aware of the harmful effects of nitrous oxide and about the products emitting the gas so that its use can be minimised at the individual level as well. In this, if the government can take action and prohibit the use of such chemicals, the effect will be more impactful.