With the June 22 interim order on Tuesday, the Oli cabinet has been restricted to five members.

Following the Supreme Court order barring 20 ministers appointed after the dissolution of the House of Representatives from carrying any responsibility, Prime Minister KP Sharma Oli has distributed all ministerial portfolios among five available ministers including himself.

With the interim order on Tuesday, the Oli cabinet has been restricted to five members.

Accordingly, Oli distributed the responsibilities as follows and the president approved it, informs a statement by the President’s Office: 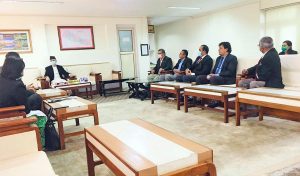