Experts hope that reviving an ancient water system of canals, ponds and rainwater harvesting can help Bhaktapur resolve its water shortages and better cope with floods in the crowded Kathmandu valley

On a Saturday afternoon in Bhaktapur, once one of the three historical kingdoms of the Kathmandu Valley, Sita Laxmi Kilambu and her neighbours are not at home enjoying their weekend brunch. Instead, they are donating their sweat to a cause that they hold dear—revitalising a near-dead pond in the heart of the city.

“We want to revive the pond so that anyone who comes to Bhaktapur can appreciate its beauty,” says Kilambu, one of the 24 women who have dedicated their free time to the Bhajya Pukhu (pond), as part of a campaign that began in October 2017. The pond had dried up since houses were built around it, so the women have been removing weeds so the pond can be filled with water again, “We want the pond to be ready before the Gai Jatra festival next week,” says Krishna Prasad Dumaru, the president of the local user group working on the restoration. “The pond is sacred and it needs to be preserved,” he adds.

Ponds like the Bhajya Pukhu are not just important for tourism or religious rituals, they are a part of a complex system of water management, which is centuries old. “The system had survived for a long time as it was connected to culture,” says Bhesh Raj Thapa, a researcher working at International Water Management Institute (IWMI), who has looked into the cultural aspects of the traditional water management system in the city, which prospered under the Malla kings between the 13th and the 18thcenturies.

The system — severely affected by the 1934 earthquake — has suffered from neglect for many years. “The Ranas who ruled over Nepal for over a century [from the mid-nineteenth century] did not do enough to save the system,” says Bhaktapur-based researcher and water resources engineer Rajaram Prajapati. “As a result, the indigenous people of Bhaktapur forgot their own technology in a rush to modernise,” he added. Similarly, as land became scarce in the old city, ponds were filled with earth to create space for public facilities such as schools.

But now, members of the local community and scientists are turning to indigenous knowledge to look for solutions to modern day water woes such as flooding and drought.

On the afternoon of July 12, 2018, the people of Bhaktapur heaved a sigh of relief. The city, battered by rain for 10 hours, finally saw rays of sunshine peek through the monsoon clouds. By then, the flood waters had already damaged property worth over Rs 119.35 million [USD 1.04 million] and killed three people. According to government records, the district received more than 100 mm of rain in a day (unofficial figures in some areas reached 135mm).

But this was not the highest amount of rainfall recorded in the district in living memory. In 1990, more than 260 mm of rain was recorded in Bhaktapur over a day. However, according to local anecdotes, there was little flooding in the settlements. The reason: rapid expansion of settlements without adhering to indigenous knowledge, says Prajapati.

The indigenous ‘Hiti’ system in Bhaktapur, which dates back to the Malla period, is a combination of land management as well as use, reuse, and storage of not just surface water, but also ground and rainwater. Under this system, clustered settlements in the valley were built on high ground—and the fertile arable land on the foothills was left for agriculture —thereby creating a gradient for water to flow into the city via the Rajkulo (the royal canals). This also left the floodplains for cultivation and to protect settlements from disaster.

The gradient helped create a system in which water would be drawn for use in the city and surplus stored in large ponds. According to researcher Bhesh Raj Thapa, who has studied the city’s indigenous water management practices, three types of water bodies existed in the Newar settlement of Bhaktapur: stone spout (Hiti), drag well (Tunchhe) and pond (Pukhu).  The Newars are the original inhabitants of Kathmandu Valley – a term used to describe people of the valley in general, including the Mallas.

“The system was cost-effective, economically and environmentally sustainable, socially acceptable and culturally crucial. It ensured proportional water distribution, recharging the local aquifer, and facilitated cascaded reuse and marginal water storage so that there was enough water even during the dry season,” says Thapa.

How the system was operated

The royal canal system (commissioned by the ruling kings at the time) used to supply water to the golden hiti on the palace premises first and then to the rest of the city.

The hitis were also a place of worship and so would be kept clean. Bhaktapur has a unique culture of cleaning water bodies every year on the day of Sithi Nakha (which marks the first day of the monsoon rains) and feeding the frogs (Byancha Ja Nakegu), believed to have an important role to play for timely rainfall.

Drainage and excess water from the hitis went to the pukhus downstream, where water was stored for other purposes. During the rainy season, the pukhus would be filled and the water would be used during the pre-monsoon period. In addition to this, surface runoff was also channeled into the pukhus.

The cascade structure helped reduce the speed of the water and thus channel erosion and the water was fed into the river through canals. Similarly, the tradition of using bricks, rather than other impervious material, helped water percolate into the ground and recharge the aquifers. Even during heavy rainfall, floods didn’t reach human settlements – they supplied much-needed nutrient-rich sediments to the floodplains.

Areas in Bhaktapur, previously been set aside for agriculture, have now been used to build houses. With the construction of a highway linking the district to Kathmandu, property prices have shot up. The new settlements are unplanned and do not have a proper water management system. While extraction of groundwater is pervasive, there is not enough space for rainwater to percolate into the soil, and groundwater recharge is almost negligible in the city area. Local aquifers are being used up and local rivers such as the Hanumante and Manohara are the only outlets for rainwater. Even those rivers are polluted.

Is going back to the roots possible?

For Bhaktapur, the restoration of ponds, such as the Bhajya Pukhu, and the historical canals that used to transport fresh water from the foothills could vastly improve the city’s water problems, says Thapa. He suggests that even if the canals cannot be restored, rainwater should be used to revive the system and recharge the local aquifers.

For new settlements, the indigenous model can be adapted to make groundwater recharge easier. The government should establish new laws that make it compulsory for households to build recharge pits and leave some portion of their land for groundwater recharge and canals could be paved with brick, he says. Scholars like Thapa are still learning more details about the indigenous water system of Bhaktapur, but they hope planners will still make use of indigenous knowledge in the days to come.

Kilambu and her friends, meanwhile, understand that preserving the pond is important. They do not know how the water management system in the city was designed, but they know their ancestors would be happy to see the pond revived.

This story was first published on Thethirdpole.net 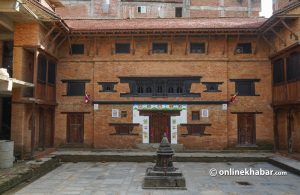 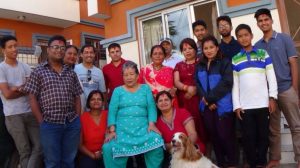