Nepali Congress influential leader Krishna Prasad Sitaula says he will not give company to the party’s senior leader Ram Chandra Paudel in submitting a protest letter to the party president Sher Bahadur Deuba.

With the scheduled 14th general convention of the main opposition party coming closer, influential leaders in the party have expedited their show of force. In this context, the Paudel-led faction is submitting a memorandum to Deuba claiming the party president’s decisions regarding distribution of active membership, and appointments in party departments are against the party statute.

Soliciting support, Paudel had invited Sitaula to his residence in Bohoratar in Kathmandu this morning, but Sitaula was not convinced, sources close to him said.

“If my group wants to do something, I will lead it,” Sitaula told Onlinekhabar after the meeting, “Why should my group sign the memorandum of the other group?

Sitaula said he would share his opinions about the issues raised by Paudel in a meeting of the party’s central working committee expected to be held soon.

So far, 27 CWC members have signed in the memorandum. The Sitaula camp has four CWC members including himself, Gagan Thapa, Pradeep Paudel and Shiva Humagain. 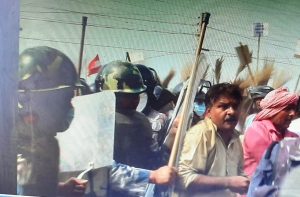