The National Assembly has appointed three members for the Parliamentary Hearing Special Committee on Friday.

The Committee, which will carry out hearings for constitutional and diplomatic appointments, will comprise members from both the houses.

A meeting of the Assembly held on Friday endorsed the names of Suman Pyakurel, Nanda Chapai, and Jitendra Narayan Dev.

The House of Representatives is yet to finalise the list for the Committee, but Speaker Krishna Bahadur Mahara has pressed the parties to submit their names at the earlier.

But, the main opposition party, Nepali Congress, is refusing to provide names from its side demanding that leadership positions of House panels be shared among parties on the basis of their overall strengths.

Of the total 16 House committees (10 of House of Representatives, four of National Assembly and two joint), the Congress has demanded that it get leadership in four panels.

However, the ruling Nepal Communist Party says it will let the Congress lead the Public Accounts Committee only in the Lower House. 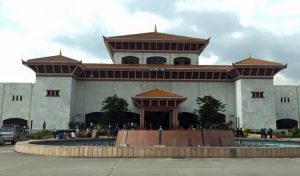