As many as 39 people were killed by floods and landslides in the past 20 days, informs the government.

Deputy Prime Minister and Minister for Home Affairs Bishnu Paudel informed a National Assembly meeting on Sunday that 31 others are missing and 46 injured in these incidents since June 14. He informed 22 districts were affected by the monsoon disasters as they caused 226 disaster events in total.

The government has allocated Rs 50,000 for each family being rendered homeless due to floods and landslides, according to him. As many as 572 families have been given support this year so far. 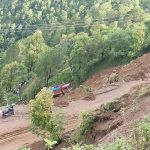