Nepal Police said on Friday it found involvement of two police officers in the rape of a verbally-challenged woman (35) in Chandrauta, Kapilvastu, about a month ago.

Inspector General of Police told the Parliament’s Social Justice and Human Rights Committee: Available evidence points at the involvement of only two officers in the rape.

At the meeting, committee members said at least 10 police personnel from the Armed Police Force’s Chandrauta-based Bindhyabasini Battalion were involved in the crime and they had urged police to bring all of them to justice.

They said IGP Aryal has no right to blame anyone without clinching proof.

Aryal said the investigation faced difficulties also because of the woman’s inability to speak.
Personnel from the battalion had allegedly raped the woman when she had gone to graze her buffaloes at Jawai Stream in Chandrauta.

Police have arrested Assistant Constable Raju Tharu and APF Jawan Lok Raj Awasthi on the charge of involvement in the crime.

At the meeting, Home Minister Shakti Basnet and APF IG Durja Kumar Rai pledged to bring all those involved in the crime to justice.

APF has already suspended Tharu and Awasthi. The committee pointed that other personnel from the battalion may also have been involved in the crime. It described the criminal investigation into the crime as ‘incomplete’. The panel directed the Ministry of Home to conduct a ‘reliable’ investigation by forming a central monitoring team comprising psychologists.

The victim is receiving treatment in Kathmandu. 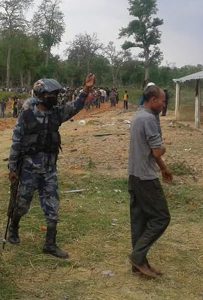