There is a constant scope of learning in life, but can someone learn from public toilets?

Under the Swedish International Development Cooperation Agency (Sida)’s advanced international training programme on sustainable urban water and sanitation, stakeholders from various countries including Nepal and Bangladesh participated in a series of training events. Under the programme, the Nepali team visited four cities in Bangladesh from March 6 to 13 whereas the Bangladeshi team came to Nepal from March 28 to April 6 to learn about public toilet management here.

So what did Bangladesh take away?

During the week-long training and cross-country learning opportunity, the Bangladeshi team went to visit various sites of Kathmandu valley, including the wastewater treatment plant in Guhyeshwari, a water supply project in Dhulikhel, and smart public toilets in Kathmandu and Patan. The team also went to Pokhara to observe water management systems there.

An assistant professor at Khulna University of Engineering and Technology, Esraz-Ul-Zannat, says, “Dhaka is a densely populated city, with over 20 million population. So, you can imagine we obviously have a problem with having enough public toilets needed for them. And we definitely do not have any smart toilets. What we have are modern toilets and they too are having issues with water supply and sanitation. Yet some local and government initiatives have started to correct that.”

“Dhaka already has a master plan in place, with detailed area plans in special zones including where and how many public toilets should be. But, the reference of Kathmandu for smart public toilets can be applied there,” says Zannat, who teaches urban and regional planning, “Some toilets are gender-friendly and disable-friendly and already have some sensors and technology in place. But, there are more we can integrate surely as per what we have seen here.”

The biggest challenge in Dhaka, he says, is the space where they can establish new public toilets. “There are a lot of restrictions, and I feel we are still short of space. So our approach will have to be to remodel the existing public toilets and aim towards making them sustainable rather than focusing on aesthetics or number alone.”

Adding the aspect of soil contamination, another Bangladeshi participant, Associate Professor Nipa Adhikary (Tutul) says, “For sustainable and healthy development, one needs to make sure that the groundwater and the soil are not contaminated. And smart toilets [with digester, waste recycling system and rainwater harvesting] like the ones we have seen here, set up in initiation of Aersan Hub, can be a sustainable solution to the unmanaged sewerage system, in any aspect.”

Apart from that, Zannat says that Dhulikhel’s user committee and their election system for a better and transparent governance system is something everyone can learn from for sustainability. “Rather than a top-to-bottom approach, locals here are asking the government for facilities that they need and that is something very progressive and it will ensure sustainability too.”

What about Nepal’s learnings?

Kumari Rai, the chief of the City Planning Commission Secretariat of Kathmandu metropolitan city and a participant in the training programme says Nepalis also learned a lot from Bangladesh as Asian countries all share the common problem of water and sanitation.

“When we visited Bangladesh, we found that Dhaka WASA had done a wonderful job of properly supplying drinking water to all its residents, which is way beyond what the KUKL has been capable of doing here.”

“Given that they have a bigger source of water and a functioning groundwater system, the amount of water supply was sure to be more than ours. But, what impressed me was that there were five large water treatment plants that ensured a 24/7 supply of clean drinking water in the capital Dhaka which has a 22 million population, which is way more than our capital city which has just 1 million.” Pointing that out, Rai says Nepal can definitely look forward to better managing the residents here.

There is another aspect that Nepal could learn, says Rai, “All the projects–running and in the pipeline–have better planning whether it is in drinking water or sewage. They all have master plans and accordingly, they work in phases and parts with better coordination. It is something Nepal can learn in its bureaucratic system as we have many lapses and the distribution of roles and power within is uneven.”

Adding to this, Zannat says that like them, Nepal can attempt to undertake several projects simultaneously to expedite the growth here.

Adhikary says that Nepal’s soil erosion is an area where Nepal can work on and learn from Bangladesh. “Also, contaminated water should not be released, it will contaminate the surroundings as well as groundwater.”

“Our focus is still more on emergency supplies and not creating a sustainable water supply solution, we have definitely more to learn,” concludes Rai.

Saroj Basnet, the vice-chairman of the City Planning Commission under the Kathmandu metropolitan city acknowledges that the city government has problems. According to data from 2018, there were only 58 public toilets for some 1.5 million people. And unlike Kirtipur, Kathmandu is yet to adopt the policy and guidelines for toilet and sanitation too.

“But, Kathmandu is also committed to adhering to the Sustainable Development Goal (SDG) 6.2 and is working towards ensuring safe drinking water and sanitation management as well as adding public toilets, one in every five km and making all of them gender-friendly and disable-friendly and not just a handful.” 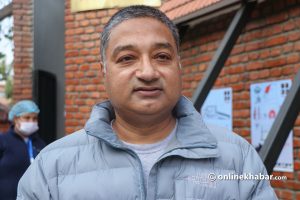 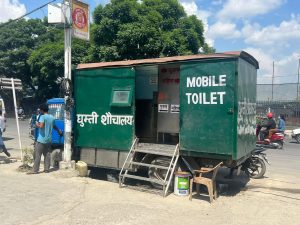 How this man is popularising mobile toilets in Nepal 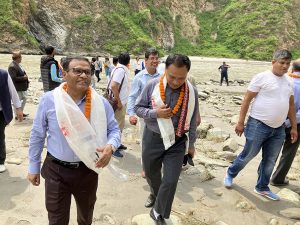 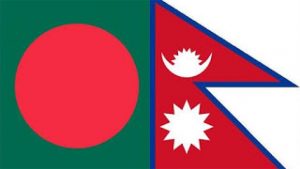 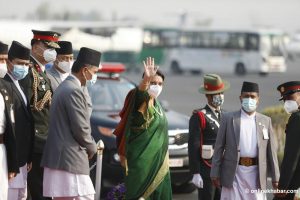