Honda CRF 300L is Honda’s dirt bike series released this year. The CRF series is really popular among dirt bike and off-road bike lovers in Nepal. It is also one of the most popular bikes in Nepal.

CRF 250 was the most desired off-road bike here in Nepal, and now, CRF 300L is taking over. Since the new version of the CRF bike is on the way, it is very unlikely that the 250cc version will be manufactured anymore or at least it will not make it to Nepal. Like CRF 250 and 250 Rally, the new CRF 300L is also accompanied by CRF 300 Rally. Apparently, there are a couple of upgrades from design to the power on the new version.

Syakar Trading, the authorised distributor of Honda vehicles in Nepal, has opened booking for the bikes soon after it also launched Honda Hornet 2 in Nepal. It means Honda seems to be in a transition phase, bringing updates on its two-wheelers but also adding hefty price tags.

The two bikes in the Honda CRF 300L series are no exception.

Let’s get into the details of the bikes.

CRF 300L gets its new styling based on the CRF450-R Works edition. A lot has changed in the new CRF 300L. Though the looks may seem similar to that of 250L at the first glance, there are lots of minor changes on the bike that makes it more powerful, agile and even lighter. The front of the bike gets the standard halogen headlamp with halogen indicators. It goes the same for the rear section as it gets a halogen lamp as well.

The bike has got slimmer around the knee and thigh area to help with input from the lower body for optimum control. Similarly, the footpegs also have been moved back.

Similarly, CRF Rally 300 is inspired by the Dakar CRF 450 Rally machine. It features a large front fairing while most of the features are similar to the CRF 300L.

Both bikes in the series share similar power figures. CRF 300L is powered by a 286cc liquid-cooled, single, DOHC engine. The engine can generate a maximum power of 27.32 PS/8500rpm and a maximum torque of 26.6Nm/6500rpm which is not a significant increase from the previous generation. It can reach an estimated top speed of 130kmph. While the standard CRF 300L has a fuel tank of 7.8 litres, the Rally 300 has a fuel tank of 12.8 litres. Both bikes are mated with a six-speed gearbox.

A lot has been improvised to make the bike powerful and lighter. The chassis and suspension have been optimised. The lateral rigidity has been reduced by 25 per cent, thus improving the overall manoeuvre and rider feel. The ground clearance has also been increased and has a whopping 285mm on the standard version and 275 on the Rally. The swing arm’s lateral and torsional rigidity also has been reduced by 23 and 17 per cent respectively.

The optimised airflow through filter and exhaust helps fine-tune the power of the bike. The intake camshaft also has been redesigned to improve the power output at low and medium speed ranges. The bike also gets the standard slipper clutch. This reduces the clutch load by 20 per cent and allows better control and reduces fatigue on long rides. The new changes on the bike make it easier to adapt to both cities and off-road rides.

Brakes, suspensions and other features

Talking about the suspension, both bikes have a 43mm telescopic upside down at the front while at the rear there is Honda’s own pro-link. There is also an option to turn off the rear ABS of the bike. The brakes and suspension on the bike are coordinated properly to match the power and performance and give the optimum riding experience both on the city and off-road rides.

There are tons of improvements to the new version of the bike. Some of the notable features of the bikes are:

This is a huge jump on the pricing from its previous generation 250L and 250 Rally. There are a lot of significant changes on the bikes, but do that justify the pricing?

Perhaps this is the question yet to be answered.

Crossfire RM 250 Race Edition in Nepal: Why it’s sure to get the attention of dirt bike lovers 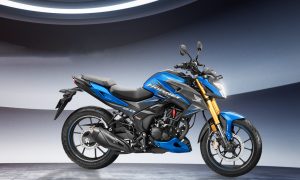