Veteran climber Kami Rita Sherpa has summitted Mount Everest for the 24th time and this story has been covered by most national dailies along with the news of the murder of nine people from two families in Panchthar. The provincial governments are upset over PM KP Sharma Oli’s remarks on federalism and this has also been featured on the front pages of a few national dailies.

Kantipur and The Kathmandu Post report that the provincial governments are upset with PM KP Sharma Oli after his remarks on federalism on Tuesday. Inaugurating the laying of optical fiber in Dhading, Oli said that provincial and local governments were not separate entities, but units under the federal government.

He claimed that provincial and local governments were trying to act as independent governments. The remarks, constitutional experts say, contradict the fundamental principle of the Constitution of Nepal, which was promulgated with full support from the Oli-led party— the erstwhile CPN-UML.

MoFA’s decision to appoint foreign secretaries from other ministries criticised 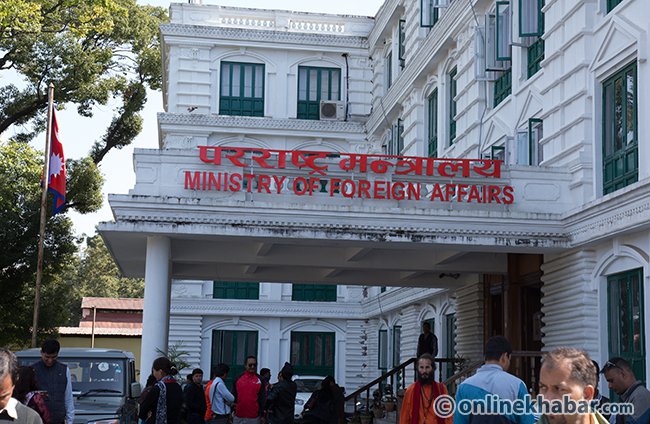 The Himalayan Times reports that the government’s proposal to appoint the foreign ministry secretary from a list of bureaucrats who have never worked at the Ministry of Foreign Affairs has drawn mixed reactions from members of Parliament with the ruling party lawmakers supporting the move and the opposition opposing it.

The Federal Civil Servant Bill registered in Parliament states that the government holds the right to transfer any government secretary to any ministry, including MoFA, in special circumstances.

This goes against the practice of appointing foreign secretary from among bureaucrats working at the MoFA.

The government has long been appointing foreign secretaries from a pool of MoFA bureaucrats as only those with experience in foreign service and those who have understood Nepal’s foreign policy well can steer the ministry in a proper way.

Annapurna Post reports that President Bidya Devi Bhandari is curious about three controversial bills that have been tabled in the parliament. She has been meeting MPs and holding a discussion about the Media Council Bill, Passport Bill, and National Human Right Commission act. The Passport Bill has already reached the president for approval. The two other bills, however, are still being discussed in Parliament.

The Himalayan Times reports that the private sector has urged the government to make the budget ‘implementation-oriented’ and avoid infeasible programmes and policies. The private sector said governments have failed to fully implement past budgets, ultimately affecting development and economic growth. In this context, they said the incumbent strong government should bring a budget that ensures budgetary programmes and policies are properly implemented.

The head of the FNJ, the umbrella organisation of Nepali journalists, also said the federation may invite an international media mission to Nepal to study the state of press freedom.  Even as the constitution ensures full freedom of the press, some of the bills drafted by the government have proposed confiscating media equipment and imposing hefty fines on media outlets and journalists. Journalists across the country have been protesting against the bills.

A Bill to Amend Media Council Act, which was currently brought at the National Assembly, has proposed a fine of up to Rs 1 million for media outlets and journalists for publishing any content in violation to the media code of ethics.

The Kathmandu Post and Republica report that the United Nations Human Rights Committee has urged Nepal to investigate the rape of a woman during the decade-long conflict, while also highlighting the need to adapt its laws related to rape and sexual violence and remove obstacles faced by victims to accessing justice and compensation. This isn’t the first time the UN and other international agencies have urged Nepal to investigate human rights violations, rape and sexual violence, which took place during the conflict. In 2017, the UN called on Nepal to probe a case where a woman was raped in 2004 by Nepali soldiers.

Foreign Minister Pradeep Gyawali ensured the international community in Geneva in February this year that there would be no blanket amnesty for the perpetrators of serious human rights violations. However, cases of sexual violence from the conflict era have been under-reported, and their documentation has been scarce compared to other serious human rights violations during the same period. US ambassador cannot have conversations with people: MoFA

Kantipur reports that United States Ambassador to Nepal Randy Berry’s planned public interaction on social media has drawn a negative reaction from the Ministry of Foreign Affairs. MoFA secretary Shanker Bairagi said that a diplomat like Berry couldn’t hold such interaction programs with the public. Bairagi said that Berry has to seek permission from MoFA before hosting such interaction programs. However, US embassy spokesperson said that the ambassador didn’t feel he needed to seek permission as it was public diplomacy. Republica reports that a case filed by the Ncell and its parent company Axiata Group for arbitration regarding the capital gains tax (CGT) assessed on the telecom company by the Government of Nepal has been officially registered at the International Centre for the Settlement of Investment Disputes (ICSID).

In their arbitration case, Ncell and Axiata have argued that Nepal’s conduct in relation to capital gains tax imposed on the mobile company is against the Bilateral Investment Treaty between Nepal and the UK.

Ncell had filed a writ petition at the Supreme Court challenging the CGT assessed against it by the Large Taxpayers Office. In its writ petition, the company claimed that the LTO has erroneously assessed its tax liability at Rs 39.06 billion. Ncell stated that the CGT stands only at Rs 14 billion as it is not responsible for interests and fines for delay in payment as the tax has just been assessed.

Rajdhani reports that Managing Director of Nepal Electricity Authority (NEA) Kulman Ghising has been accused of graft by a lawmaker of the ruling Nepal Communist Party (NCP). During a meeting of Accounts Committee of the Parliament on Tuesday, NCP lawmaker Amanlal Modi accused Ghising of embezzling nine billion in the pretext of recovering a due amount from industrialists and businessman using dedicated and trunk lines. However, Ghising denied the accusation and said that he was ready to be hanged if found guilty. He added that a probe committee has been formed to investigate the alleged irregularity.