Police have opened fire on protesting cadres of the Janamat Party, led by CK Raut, in Ganeshman Charnath municipality of the Dhanusha district in southeastern Nepal on Sunday.

Five cadres have sustained injuries and they are undergoing treatment at the Provincial Hospital in Janakpurdham, the party informs.

As the cadres were blocking the East-West Highway since early morning today, police had used force to reopen the road. The District Police Office spokesperson Jitendra Basnet says police used 11 rounds of rubber bullets and 16 canisters of tear gas to disperse the mob.

The East-West Highway has reopened now, according to him.

For the past week, the Janamt Party has been staging protests in various southern districts demanding fertilisers and other facilities for the farmers easily. 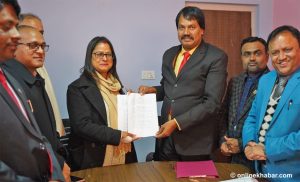