A massive fire broke out at Dobhan Bajaar of Taplejung, on Tuesday, March 2, 2021.

Around 50 houses have been destroyed as a massive fire broke out in Dobhan Bajaar of the Taplejung district in Province 1 on Tuesday morning.

A fire truck belonging to the Taplejung municipality and locals contained the fire after around five hours.

Chief District Officer Gayatra Adhikari Khadka says her office was reported that 49 houses belonging to 33 people were destroyed. In addition, 22 families using the houses on rent were also rendered homeless.

Adhikari says the District Chamber of Commerce and Industry and the district branch of Nepal Red Cross Society are providing immediate relief to the victims.

The incident site is around one hour drive from the Taplejung municipality. Dobhan Bajaar is the second biggest market area of the district.

Details about the cause of the fire and the amount of loss are not known yet.

Meanwhile, speaking at a function in Morang of the province today, Prime Minister KP Sharma Oli expressed his sadness over the news report, assuring the locals of the reconstruction of the houses and needful relief to the victims.

He said the government would coordinate with the provincial government in the post-disaster efforts. 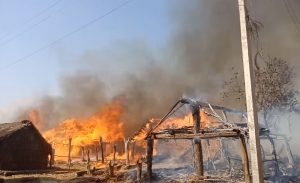 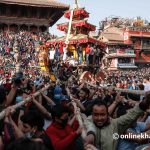