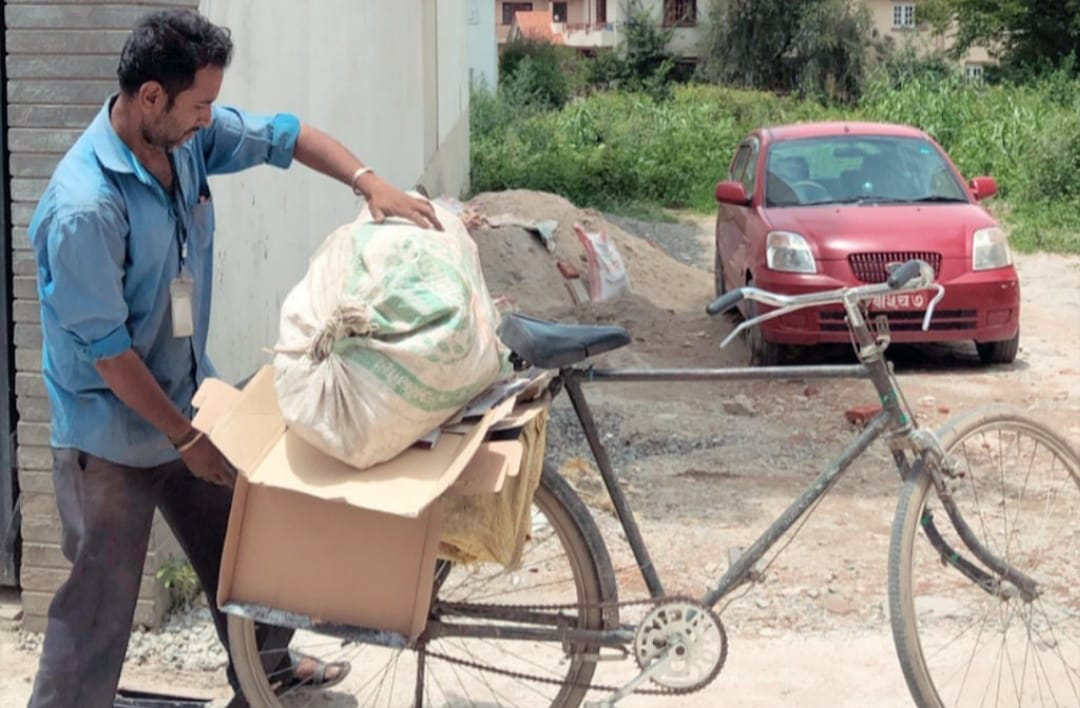 Some people shoo them away, many call them names such as ‘kawadiwalas’ and ‘khates’ while others shun them for their appearances. That is the sad reality of the people who have been the ones saving the environment.

Some 20 years back, when housewives of Kathmandu heard a man on cycle calling ‘khaali sisi, purano kagaj’ (empty bottles and old papers), they used to call them to their house and sell old books and newspapers and empty bottles lying around the house for new utensils. Now, with many families choosing to stay in apartments and colonies protected by security guards, such calls have become rare. But, their contribution is still important.

Who are these people?

There is no proof as to when Kawadiwalas entered the Kathmandu valley. But, it is certain that, generally, this is a job is done by people who are living below the poverty line. Aayushi KC, the founder of Khaalisisi, a startup that is helping these people find better market opportunities, says, “It started as scavenging: people finding reusable and recyclable things from the unclaimed garbage lying around.”

Poverty Reduction of Informal Workers in Solid Waste Management (PRISM), in 2013 had cited that there are about 10,000-15,000 people working in the waste industry in Kathmandu including waste pickers.

To date, KC says, they have developed a tightly-knit community that has hierarchy and supply chain management like no other. “It takes years and millions of [monetary] investment for people to create this kind of network that works like a well-oiled machine, but we have not only failed to realise it, also refrained seeing it as a respectable job like any other and investing in it.”

Why are they important?

KC informs these people are at the first layer of Kathmandu’s waste management system.

“They deposit their collections at collection centres (kabads), usually, the ones they have tacit agreements with, where they deal with middlemen buyers or wholesalers,” she explains how they work, “They segregate the waste into paper, plastics and such, which is further segregated and sold to specialised buyers by the middlemen. It finally reaches the end buyers being the companies that recycle them.”

Since the world is talking a lot about sustainability these days, their importance has even increased, according to her. “Contrary to the ‘3R’s that many might know, there are up to ‘14R’s that people have introduced,” she says, “While we are creating hype around them, a system incorporating all the ideologies of sustainability, sadly, is being ignored. Our waste collectors who come on cycles, roaming area to area, are a big part of it.”

A human, on average, produces some two kgs of waste a day. Kathmandu alone produces 350 metric tonnes of waste daily. They get collected and dumped at Sisdol, the only dumping ground active since 2005, which collects waste of 18 municipalities of Kathmandu. “There, all kinds of waste mix together and, consequently, forming leachate that pollutes the land or water resources where they get mixed into. The trucks are private services that they do not care about the environment because the more they dump, the more they are paid.”

On the other hand, the moving waste buyers are collecting waste, ensuring they get recycled, regardless of their knowledge about sustainability, and also giving incentives to households and organisations for waste, says KC.

“When waste is collected by the trucks, it should be realised that they all are being dumped in one place, without segregation, putting all efforts for recycling in vain,” KC recommends, “But, if people and the government invest their time to promote this system of kawadiwalas, it is a decentralised ecosystem that has worked well. It is a win-win agreement for people who want to recycle, for the waste collectors, the government, our economy and our environment’s sustainability.”

Here, she adds, big brands and companies should think about their Extended Producer Responsibility (EPR) and introduce buyback schemes to minimise the load on nature, cost of production and encourage recycling in the process.

“We are still dumping waste, day after day, at Sisdol, beyond its capability. The new dumping site, Bancharedanda, will face the same fate as Sisdol when it comes into operation with our ways now,” she complains.

“In Kathmandu, we still lack a well-managed waste management system like in developed countries. And, [we] have settlements that are not made for heavy-weight waste-collecting trucks,” she adds, conforming itinerant waste collectors are an effective way to prevent environmental pollution and promote sustainability, simultaneously.

Challenge of rebranding the image

“In childhood, many of us were told to stay away from them [kawadiwalas] else they would put us into their sacks and sell us. And, many of us are, still a victim of that stigma, feeling uncomfortable to welcome them,” laments KC.

“With urbanisation and people shifting to big buildings and apartments, they created a barrier for our waste collectors; they were denied access by the security personnel citing threat, based on their attires and social reputation,” she adds

To break the stigma, Khaalisisi is working to rebrand this image of kawadiwalas or waste entrepreneurs, according to KC. “We gave them safety gear, identity cards, uniforms and access to a number of households and organisations. People are a bit more welcoming when they look professional.”

But, not all has changed, she complains, “Having said that, what we have not been able to do is change the stigma against our Khaalisisi Friends (KSFs), what we can the collectors. People become our clients and they expect the collectors to be “sophisticated” and not “low class” waste collectors.”

“We are already familiar now with the idea of Uber or Pathao/Tootle, what we now have do is look at our waste collectors as the same for waste management,” she suggests.

With Khaalisisi’s help, many waster collectors are now earning about Rs 40,000-50,000 a month, more than any other respectable jobs in society. But, she shares, people still look at this job as ‘low-class’. “People have denied working and earning as KSFs, saying they prefer to be unemployed instead.”

Another challenge to rebrand the image, KC says, was stigma among the KSFs. “When we first started giving out ID cards, our KSFs were hesitant and used to say no as they are haunted that they would be judged by their own family or community for doing this work,” she says, “But, we made them understand that what they are doing is not waste collection but waste management.”

This change in thought from being a phohorwala (the waste people) to saphaiwala (the cleaning people) is crucial, she says. “Now, they take pride in their own work, ask us to share their stories on social media platforms and even give interviews.”

Commenting on the flip side of the digital divide, she says, “Our young children are now connected to the world, they know about recycling and innovative ways the world have come up with to manage waste. But, they are so disconnected from what is happening outside their house, and that this effective sustainable ecosystem is at play. If we can educate them, our waste management problems curbed significantly.”

KMC urges citizens not to throw waste on roads