A tiger was found dead in a buffer-zone forest in Parsa, on Saturday, April 24, 2021. Photo: Courtesy Bal Kumar Basnet

A royal Bengal tiger was found dead in the Rambuddha Community Forest area of Parsa district in the southern Nepal on Saturday morning.

The adult big cat was found dead inside the forest near Ramnagar, Thori municipality-3 of the district, according to Thori Buffer Zone User Committee’s Chairman Bal Kumar Basnet.

The area lies in the buffer zone of the Chitwan National Park. Hence, the park administration has taken it to the park’s headquarters in Kasara of Chitwan, according to him.

The cause of the death has not been identified immediately.

Locals who had gone to graze the cattle nearby had spotted the dead tiger and informs the user committee.

Earlier on Thursday, a local was injured in the area after a tiger attack. 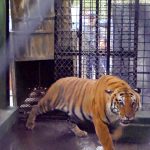