The story behind chaku: A sugary treat to mark winter’s end Sweet, hard, crunchy, chewy like a candy, with a strong smoky flavor and chocolate-like color—chaku entices as much with an appearance as it delights with taste.

Kids clamour for it, adults find it hard to resist, and it serves as a condiment for some Newari dishes and an indispensable item for festivals, such as Maghe Sankranti(served with ghee & yam) and Yomari Punhe(as stuffing for dumplings).

The story of chaku is as old as the hills around Kathmandu. History has it that the first to introduce chaku in the old Nepal Valley (Kathmandu, Lalitpur, Bhadgaon and other towns within the valley) were the people of Tokha, the old Newar town in the north-west of Kathmandu.
The base ingredient required for the making of chaku, sugarcane, was easily available as it was grown in abundance at the time in Kathmandu. “If Bhaktapur is known for yogurt and Khokana for manually-pressed oil from roasted mustard, Tokha is famous for chaku,” says Kashi Lal Shrestha, who runs one of the oldest chaku factories in Tokha.
I’d always wanted to try Tokha’s famous chaku, but, even though I live very near the old town, I somehow always missed out on the sweet delicacy. Not this time though. Since the yomari punhi, a yearly festival of the Newars celebrated on the full moon day of Poush (Dec-Jan), was just around the corner, my wife asked me to fetch some chaku from Tokha.
So I set off on a 25-minute walk from where I lived, to Tokha, once an independent Kingdom called Jaipur (later named Laxmipur), its history dating back to the Lichhavi era(c. 450-c. 750 ce). Eventually, the town came to be known as Tokha (in Newari, ‘tu’ ‘khya’ translating to sugarcane field.

A jumble of modern and old houses—the back alleys reminiscent of old Madhyapur Thimi or Bhaktapur—Tokha still has age-old houses with decaying woodworks and crumbling walls. Curiously, the people of Tokha, all Newars, bear an uncanny resemblance to the Newar inhabitants of Thimi or Bhaktapur.
Every local in Tokha, kids included, seemed to know where the chaku was made. As instructed, I followed the lane to one of the oldest chaku factories located at the end of a network of confusing brick-laid alleys. Amusingly, after negotiating about 50 meters, all I had to do was follow a strong distinct aroma wafting into the alleys. My luck was in—the factory was open, the work in full swing, and the owner, Kashi Lal Shrestha, present amidst his busy workers.

In The Old Times

“In the old times—during my grandfather’s days—chaku in Tokha was made from raw sugarcane juice. The sugarcanes for our factory came from Tushal (north-east of Chapali, Budanilkantha), where they were grown in profusion.

First off, the sugarcanes were kept in a moist shallow pit, lightly watered for a few days for mellowing, then chopped to size, bashed, and finally taken to the wooden press (similar to the primitive manually operated mustard oil presses of Khokana) for extraction,” explained the 73-year-old Kashi Lal, his Nepali marked by a conspicuous Newari accent.

“But with time people stopped growing sugarcane in Kathmandu, opting for other cash crops like rice, wheat, and corn. And the age-old tradition of making chaku from sugarcane juice was gradually replaced during my father’s time by shakkhar or jaggery (bheli in Nepali, sakha in Newari and gud in Hindi), which came from the Terai and neighbouring India,” continued Kashi Lal, as he scraped dry coconut, the shavings of which are used as topping for the chaku cakes.

As I entered the tin-roofed shed that served as the chaku factory, a very strong and robust smell hit my olfactory nerves. Everything inside seemed in a hotchpotch—almost a clutter. On one side, cauldrons of boiling thick liquid sat on log-fired stoves, men stirring the concoction with large wooden ladles.

Close by, two young men worked on long, fat dark brown sticky lumps, their rapid hand movements appearing like an act of acrobatics. Another man shaped the thick gummy dark chocolate mass into small lumps, weighed them on a scale, and tossed them to a corner where women sat on the floor shaping the lumps into thin round cakes and packing them in plastic wrappers.
The aroma from the cooking of fresh jaggery was so strong that it made my mouth water, and when offered a tiny piece from the still-warm lump, I could not resist myself. It dissolved in my mouth like butter. Chaku-making is a skill that requires precision and care. Kashi Lal explained. “First, the shakkhar that comes in big lumps is heated with a little water till it melts to a soft dropping consistency so that it can be strained through a sieve. The main purpose of straining is to separate grit and foreign matters from the thick liquid.

Next, the molten sakkhar is poured into another cauldron and boiled for an hour and a half at approximately 360 degree Celsius, stirred constantly.” The hot liquid (called treacle in England and molasses in the US is used in baking or added to hot cereal) is then spread out on a wide flat stone to cool off to a coagulating consistency. I was watching the entire process as Kashi Lal filled me in on the process of chaku production.

The thick batter now is ready for the next step: kneading and stretching. This stage really calls for burly arms as the batter needs to be wound around a short stout wooden stump secured into a wall, then stretched and twisted around like braiding of hair. This, in fact, is a bit tricky, as the sticky dough has to be consistently stretched, twisted and turned around the wooden stump until the dark chocolate color turns into beige, like whisked coffee. Finally, the thick mass is ready for packing, still rubbery and lukewarm. First, the tacky batter is broken into small lumps, weighed and shaped into thin flat cakes. Then it is garnished on top with shredded coconut, peanuts and shelled pumpkin seeds. After letting it cool for some time, the chaku cakes are finally packed in plastic wrappers and filled into cartons—ready for the market.
Invariably – from the boiling of shakkhar, kneading and stretching of the lumpy forms to the packing of the finished product – each process of chaku-making has to be perfectly timed. Failing that, or letting the dough get cold, can spell disaster for the simple reason that the entire mass turns hard as stone.

Happy and wiser, I bid Kashi Lal and the entire team goodbye and left for home with a few packets of the renowned chaku of Tokha.
Access: Paved road. Tokha town can be reached by your own vehicle or public transport like micro-buses and buses that shuttle to and from Kathmandu to Tokha. 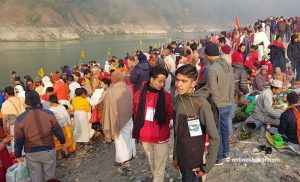