The annual festival, Maghe Sankranti, is celebrated by eating ghee and chaku, yam, (white and black) sesame balls, and fish. But, did you know that you can also celebrate the day by eating khichadi? Yes, you read it correctly, khichadi is a popular dish to have on this day. So, this year, eat khichadi on Maghe Sankranti and give a new twist to it.

Khichadi (mostly spelt ‘khichdi’ in India) is a dish made from rice and lentils that is popular in many parts of South Asia, including Nepal, Bangladesh and India. It is typically made by cooking rice and lentils together with spices and vegetables, and it can be served as a main dish or a side dish. It is also considered a nutritious and balanced meal because it contains a combination of carbohydrates, protein, and fibre.

Khichadi is often described as comfort food because it is easy to digest and anyone can eat it, even those who are sick or have digestive issues. But, it is also eaten during festivals in South Asia. It is a popular dish to serve during religious festivals such as Maghe Sankranti, Teej or Tihar in Nepal and during Navaratri and Janmashtami in India.

Maghe Sankranti is celebrated in January, on the first day of the Nepali month of Magh. On this day, it is tradition to eat khichadi and til (sesame) laddu, which are sweet balls made from sesame seeds and jaggery.

Why eat khichadi on Maghe Sankranti?

For the same reason, some communities in both Nepal and India also eat it during periods of fasting or detoxification. The dish is often accompanied by various assortments, such as yoghurt or pickles, to add flavour and nutrition.

However, it is not clear how the plain and simple dish became associated with Maghe Sankranti. The exact origins of this festival and its traditions are not well documented, and there is no widely accepted explanation for why it is traditionally eaten on this day. The association between khichadi and Maghe Sankranti may have evolved through cultural and regional traditions.

The dish is made from rice and lentils, which are easy to digest and nourish, and it is often accompanied by yoghurt or other accompaniments to add flavour and nutrition. However, people of different religions or communities in these regions may also participate in the festival and eat khichadi as a part of the celebrations.

It is typically made with minimal oil and does not contain any cholesterol, making it a healthy option for maintaining a balanced diet. So, it is a low-calorie dish and it can be filling as well, making it a good option for people who are trying to lose weight. It is also a common food during fasting periods because of its easy-to-digest properties as it can provide energy without overloading the stomach.

How to make khichadi?

Here is a basic recipe for making khichadi:

Khichadi is typically made with rice and lentils, and it is usually vegetarian. However, it is possible to add meat or other protein sources to make it a non-vegetarian dish. For example, you can add cooked chicken, lamb, or shrimp to the dish along with the rice and lentils. You could also add eggs or tofu for a protein boost.

Keep in mind that if you add meat or other non-vegetarian ingredients to khichadi, you will need to adjust the cooking time and method accordingly to ensure that the protein is cooked through and safe to eat. 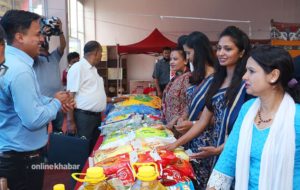