Taleju temple opens for the public once a year. But, for local Manandhars, it’s a fortnightly affair Almost everyone who knows there is the Taleju Temple in Hanumandhoka of Kathmandu also knows that the temple opens for the public only once a year, on Mahanawami (ninth day) of Dashain festival. But, there is a group in Kathmandu that has access to the interior of the temple every fortnight, 24 times in a year.

Whereas the front door (on the western side) opens for the public every Mahanawami, the rear door opens for the Manandhars on the full moon day and the 14th day of the waning moon (Krishna Chaturdashi, locally called Chahre) every lunar month.

A group of people from the Manandhar clan goes the temple to offer oil for the eternal flame (Akhanda Jyot) that burns in the temple. The oil that they offer is enough for the flame to burn for the whole month. This ritual has been continuing since the construction of the Taleju Temple and is restricted to the Manadhar clan only.

Honouring the same tradition, Saroj Manandhar went to the temple with oil for this fortnight today. Though the offering person brings a crowd of around 25 people every time, the number was smaller this time, due to the coronavirus fears. Like the tradition is specific to the Manandhar clan only, the oil that they offer is also specific i.e. sesame oil. The oil is used in all of the big pujas and also has high healing properties, so people use it to massage ailing body parts.

“On Chahre, one offers a total of 22 litres of sesame oil. Out of that, 10 litres are offered for the Akhanda Jyot while the other 12 litres are offered to light the stone lamps around the Temple. They take the oil in two traditional copper vessels (gha:), one of 9.5 litres and other for 2.5 litres that we have,” informs Gajendra Manandhar, the secretary of Kendriya Manandhar Sangha, “On the full moon, they offer 12 litres for the stone lamps only.”

The tradition is voluntary; nobody has funded it except the locals. They say one has to spend around Rs 5,000 every fortnight. “The sesame oil today costs me about Rs 190 per litre,” shares Saroj Manandhar, an arts and craft teacher at Triyog Secondary School.

Interested individuals register themselves at the Sangha, with Rs 100 as confirmation fee. Many individuals have already registered for the deed, so one has to even wait for years before their turn comes. Saroj Manandhar registered herself six years ago, and she finally got to set foot inside the temple to pay her homage today. She is wishing for the well-being and prosperity of her family. “I had heard of the story, seen my parents’ family go to make the offering and I had always wanted to do this. This is the first time and the deed is solely for my family.”

Since 2006, when the Sangha, an association of local Manandhars began managing the tradition, 148 Manandhars participated in the ritual, one after another. Further, many others have already registered their names for the purpose and the people currently listed will be sufficient for the next seven years. “It is basically the first-come-first basis. However, sometimes, the names are brought frontward or backward because of the events like a death in the family, special requests or other unforeseen events,” adds Gajendra.

Till 2013, the ritual used to be performed once a month, on the day of Chahre (Krishna Chaturdashi) only. That year, the Sanga and its Shree Taleju Bhawani Akhanda Jyot Subcommittee installed 313 stone lamps around the temple (called Chaaka Mata in Newari) and its staircase. After then, the clan started visiting the temple on the full moon day too and lighting the lamps twice a month.

Why Manandhar clan only?

The reason why only the Manandhar clan is allowed to offer the oil to Goddess Taleju lies in the prominent role of the early clan members in the construction of the temple. In the medieval times, then King Mahindra Malla had ordered to build the biggest temple of the time in the name of the goddess after he saw the goddess in his dreams. The king called upon the best of the artists and workers in the Kathmandu Valley to complete the construction of the three-storey temple in the pagoda style.

Manandhars have been documented to be a very active group in the ancient community. They were architects, informants, artists, and oil producers of the time. The said construction was initiated under the leadership of an elder member of the Manadhar clan. The same group is also known to have successfully reconstructed the Shree Swayambhu Chaitya. He had requested the king to undertake the work with the commitment to complete the construction of the temple on time, with due diligence and perfection. However, during the construction, they reportedly faced a problem: whatever they would have done the previous day would be found damaged every night. Upon the investigation of the tantrics then, they found that the Goddess Tarani, whose temple is situated on the north-eastern side of the Taleju Temple even today, was angry with them because the Taleju Bhawani would get a bigger, better temple than hers. The king, then to calm the Goddess Tarani, decorated her temple with 21 golden pinnacles (gajurs) and sacrificed 360 buffaloes. After that, the construction was continued without obstruction.

King Mahindra Malla was very pleased with the work and asked the Manandhar elderly to ask for some reward. The leader of the constructors then requested the honour of being able to provide the oil for the Akhanda Jyot, for himself and his future generations.

Meanwhile, a group of Manandhars known as Sinchaa Khala also offers sesame oil at the Pashupatinath Temple annually, on the day of Mukha Ashtami (Kartik Shukla Ashtami, which falls usually in November). At Pashupati, they offer 64 litres of oil, enough for the whole year. In return of their services, they receive 25 paisa; it has not changed since the beginning of the tradition.

This tradition rests on the story of one named Mohan Singh Manandhar from Banepa. Mohan is said to have witnessed a special dance of the gods at the temple at midnight. He was given a special offering, wrapped in a cloth, by the gods. It is said that the gods had given him a goat’s head that later turned into a mass of gold. He then decided to make a golden crown with Panchabudhha with a rudraksha on the top, and offered it back to the gods, on the day of Ashtami. The pleased gods offered him a boon; he then asked for the honour to offer oil to light the Akhanda Jyot in the temple.

Has it existed continuously?

A written account of the story related to this tradition can be found in an article written by Tirtha Narayan Manadhar published in Ya: Shi Lumanti Pau, a publication of Kendriya Manandhar Sangha.

According to it, the tradition to offer the oil by the Manandhar clan dates back to 1523 AD, once on Chahre of every month, with the completion of the temple construction. It is said that the tradition continued uninterrupted till 1934. However, when the mega earthquake struck Kathmandu on January 15, 1934, the tradition saw a temporary halt as the Taleju Temple was also affected by the tremor. The responsibility of the oil was taken by the Lyaakusa Manandhar clan–who got the name as they ran an oil factory near Lyaaku or Basantapur Durbar (under construction at present).

The reconstruction of the temple took about six years. However, the tradition could not resume till 1971 when the (Chasando) Manandhar clan, residing near and working in Chasan oil mill then, took over the responsibility to offer the oil for the temple. But, yet again, the tradition saw another temporary halt for some uncertain reason.

In 1953, the Kendriya Manandhar Sangha was established [at Chhetrapati], and after a while upon the initiation of then Deputy Chairperson Gyanendra Manandhar, the clan reinitiated its centuries-old tradition in 2006. He was also registered as the first individual to offer the oil. The tradition has continued since then, with an exception in 2009.

Later from 2011, the Sangha shared the responsibility with all members of the Manandhar clan in Kathmandu, as a way to pay their homage to the goddess and continue the tradition. 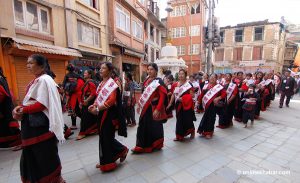 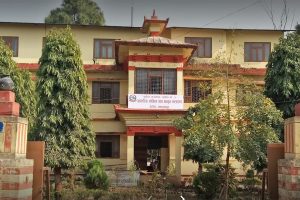