As climbers from across the world gathered at the base camp of Everest in the spring of 2021, Pradeep Bashyal and Ankit Babu Adhikari were in the villages that fall in the shadows of the mountain meeting the people from the Sherpa community who make climbing Everest possible.

They were there for one goal: to understand the life of the people who had intrigued them since 2014. To pay homage to these people, the two were writing a book titled Sherpa and to make sure they did not miss a beat, the two travelled extensively in areas in Khumbu, Makalu and Rolwalling meeting first-generation climbers and modern ones as they aimed to get an in-depth view of their life, the mountain and mountaineering.

“A lot has been written about them from a foreign perspective, but we both felt it didn’t do them justice. These guys are more than just climbers. All of them have different stories to tell and through the book, we have tried to highlight all of them,” says Bashyal who adds the book is also a symbol of the two’s friendship that spans over a decade.

And, they have been able to do that. The book will be a great read for anyone who wants to know about these people who are more than just climbers. Sherpa takes you into the worlds of climbers like Tenzing Norgay, Kami Rita, Phurba Tashi and Mingma David who climbed mountains for their own reasons. It also gives you an idea of what life was like back in Khumbu before it became a tourism hub and also touches on the dark side of mountaineering.

The seeds of the book were laid in 2014 and the two went on a reporting trip to the Khumbu region to cover the Everest Marathon. There they were in awe of how strong the people were.

“We met a guy from Phortse who ran the marathon and came third. He did so by stopping at a point and drinking chhyaang. He’d been passed by so many people but still was able to finish third. That achievement baffled us then and still does now,” says Adhikari.

Returning to Kathmandu, the two were in constant conversation about doing something. They wanted to publish a magazine. Adhikari, who is also a singer, wanted to do a charity show to buy things for the people from the community. But, other commitments in life meant these plans never materialised until 2019 when the two decided to pitch the idea of a book about Sherpas to international publishers.

“We worked on a proposal after pitching it to different publishers. Our idea was finally accepted and we started working on it in 2020,” says Adhikari.

The book touches on different subjects. The start focuses mostly on life before the commercialisation of Everest and how people from Khumbu went to Tibet crossing Nangpa La to get salt and going as far as Darjeeling to sell it.

The writers have dwelled on life before Everest for the people who were far away from the outside world given their geographical nature.

“They were never aware of the British Gurkhas and Nepali kings and other rulers never really cared for them. Mountaineering changed their lives,” says Bashyal.

But, post-commercialisation, most of the stories of the mountaineers are the same as almost 90 per cent start off as a porter and make their way up to becoming climbing guides. Telling different stories from them was going to be a major challenge.

“We wanted to write something in every chapter,” says Bashyal.

And, they have. They have chapters on Phurba Tashi Sherpa, one of the most decorated climbers in the country who quit climbing abruptly. They touch on his career and why he choose to end his career when he was at the peak of his powers.

The tale of different times

There is also a chapter on becoming a Sherpa and how times have changed. The book focuses on how many first-generation Sherpas started climbing for good gear and food and after which the focus was more on the money made from it.

“Most of them continue to climb for money with only a few now starting to climb for legacy and record,” says Adhikari.

One of the first who climbed for legacy was Jamling Norgay, Tenzing Norgay’s son. The writers went to Darjeeling to meet Jamling and visit Tenzing Norgay’s house to understand why his father climbed Everest.

“Tenzing climbed for passion because the mountain continued to pull him towards it. We got to see how important he is to the Sherpa community to date,” says Bashyal.

The chapter about Tenzing takes you to Darjeeling and how so many Sherpa’s followed his footsteps to Darjeeling looking for a better life and settling around Toong Soong and Alubari. It tells the reader how great a man Tenzing was and how he helped whoever came to his doorstep. But, it also highlights how two questions, one regarding his nationality and the other regarding who climbed first always plagued him.

A book about the Sherpas would be incomplete without talking about the sacrifices made by people. And, the book has different chapters that highlight the deaths on the mountain. It takes you back to 2014 when an avalanche on the icefall killed 16 Nepali climbers from the Sherpa community. On this day, many lost friends and their families as it still remains one of the darkest days in climbing.

“Speaking about death is the hardest thing for these people and that was a major challenge for us as we didn’t want to trigger the traumas that these people went through,” says Bashyal.

But, they admit they were lucky as they got to speak to so many people. With the Covid lockdown in full swing, they got a lot of time to speak to even busy climbers like Mingma David and Tendi Sherpa.

These people recommended them to speak to others and that is how they ended up in Rolwalling through which they have been able to tell the story of a family of climbers who they spent two weeks with.

“We are also glad that many spoke to us away from their comfort zone, which has helped us a lot to bring out interesting stories in the book. But we were very patient with people ’cause we know how reserved they are,” says Bashyal, adding they spent hours with people to get information from them.

A story about Kushang Dorje Sherpa who lives in Darjeeling is a particularly interesting one as the writers have delved well into his past where he was sold in Bhutan to a contractor and how he escaped the camp and became the only person to climb Everest from the south, north and east face. His story is that of overcoming ultimate despair to becoming the king of Everest, something a shaman had told him as he was trapped in Bhutan.

The book also has stories about climbers who have become businessmen like Ang Tsering Sherpa who owns Asian Trekking, one of the oldest trekking and mountaineering companies and Mingma, Chhang Dawa and Tashi Sherpa who together run Seven Summit Treks, the country’s most popular mountaineering company which has changed the face of mountaineering in the country and given employment opportunities to hundreds of Sherpas from their home region of Sankhuwasabha.

The final chapters of the book focus on the changing mountain. The Sherpas realise that mountains are changing and that global warming is posing different challenges to them. But, that said, most are certain that things will not change as it is a major source of income not just for the Nepali climbers but also for the government.

The writers have juxtaposed the mountain with the climbers in a beautiful manner through which they have tried and spread the message that even though the climbers are getting stronger and better, the mountain, on the other hand, is not and that is mostly due to the climate crisis plaguing the world.

The book is a must-read for those who want to know about Nepali climbers and how they have evolved over the years. It is a great history lesson for both Nepalis and foreigners, most of whom do not know about the challenges of climbing and why these people risk their lives.

While most books about mountaineering focus on the mountains, this does not as it focuses on the people who live in their shadows and that is what makes the book stand out. 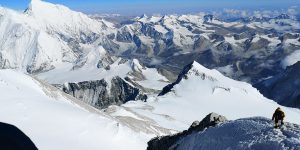