Realme Narzo 50A Prime comes with tweaks in the design compared to the older model of the same series. However, the phone has managed to retain the core features of the Narzo 50 series. With an improved design, the phone also has an FHD+ screen with more space for the screen for a better view. The battery backup is admirable as well. A different chipset has been used for this model, promising better performance. There, it can be expected that the phone will establish itself in the market.

Let’s get into the details of Relame Narzo 50A Prime to know more.

Realme Narzo 50A Prime has a glass front, plastic back and a plastic frame build. The phone flaunts a new design, which looks better than the rest of the series. The phone comes with trendy flat sides and round corners. Realme has continued with the Kevlar speed texture design on the back of its phone. This design is said to have been inspired by racing cars. Realme also says it embodies the sense of competitive speed. The finishing also looks neat and better on this model than the others in the same series. The Narzo branding looks tidy as always. Similarly, there is a side-mounted fingerprint sensor for biometrics.

The phone gets lighter and slimmer this time around, with weighing only 189 grams and measuring 8.10mm in thickness. It is available in black and blue colour options.

On the front is a 6.60-inch IPS LCD display with a resolution of 1,080*2,408 pixels and 400 PPI. A camera sensor resides inside the waterdrop notch. The display supports a 60Hz refresh rate and a 90.7 per cent screen provides a broader view of the media. For daylight use, the phone can achieve a peak brightness of up to 600 nits.

Realme Narzo 50A Prime flaunts a new camera setup on the back. The new squarish design provides a better look to the phone. The restructured camera model looks inspired by its elder siblings Realme 9 and Realme 9 Pro+. There is a triple camera setup on the back. The main 50MP camera is housed together with a basic 2MP macro and 03MP depth sensors. On the front is an 8MP selfie shooter with an aperture of f/2.0.

Some of the camera modes included on the phone are 50MP mode, ultra macro mode and B&W portrait.

The main camera on the back can record 1080p resolution videos while the front camera is limited to 720p resolution only.

Realme Narzo 50A Prime runs on Realme UI 2.0 based on Android 11. The phone is powered by a Unisoc Tiger T612 (12nm) chipset instead of the Mediatek chipset seen on the other models. The graphical duties on this phone are handled by Mali-G57.

For the storage, the phone is available in 4GB RAM and 128GB internal storage options. The storage can be further expanded by up to 1TB with a microSD card and there is a dedicated slot for it on the phone.

Realme Narzo 50A Prime has a 5,000mAh non-removable li-po battery backup. Realme has advertised that the battery is enough to provide up to

The battery gets charged with an 18W fast charger, which in fact is a downgrade from the 33W dart charger seen on Narzo 50.

Realme Narzo 50A Prime supports dual sims with 4G network connectivity. It also supports GPS and dual-band wifi. The phone uses Bluetooth 5.0 for wireless pairing while it has a USB type-C 2.0 for charging and wired pairing with other devices. The phone features a loudspeaker and has a 3.5mm headphone jack for audio.

Notable features on Realme Narzo 50A Prime are: 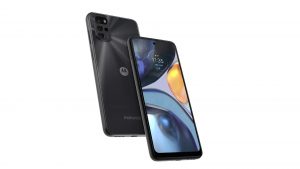 Moto G22 in Nepal: Better cameras and stronger battery than its price Realme GT 2 Pro: The brand’s first flagship phone in Nepal has many firsts for the users here