Pushpa Bhusal of the Nepali Congress and Bidya Bhattarai of the CPN-UML have filed their nominations for the House of Representatives deputy speaker election.

It is highly likely that Pushpa Bhusal will win the election as the ruling coalition has the majority in the House. But, the UML says it has not lost hope and will continue negotiations with other parties until the last minute.

The election will be held during the House meeting scheduled for 3 pm on Friday.

The position is vacant since January 2020 when the then deputy speaker Shiva Maya Tumbahangphe resigned from the position owing to party pressure. The parties did not pay attention to the issue for these two and a half years.

But, now, major parties have agreed to hold the election this Friday to fill the position so that the Constitutional Council will also get the full shape. 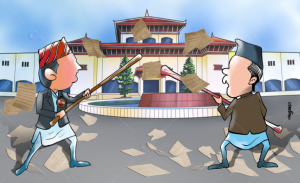