Nepa(l) Sambat is finally recognised. But, a much older calendar system awaits promotion When everyone around greets Swastiratna Shakya with “Nhu Da:ya Bhintuna” (Happy New Year) on the first day of Nepa(l) Sambat every year, Shakya, apparently, reciprocates the wish with a smile. But, at the same time, he also tells them that the Newa(r) community in Kathmandu also used another calendar system in the past, which according to him is much older than the popular Nepa(l) Sambat, even older than the Bikram Sambat.

Currently, the system is collecting dust and listing its existence altogether as Shakya says none but he is popularising it.

It is said that in ancient Lumbini, around 600 BC, there were two prominent kingdoms; Kapilvastu and Devadaha. Kapilvastu was ruled by King Sihahanu Shakya and Devadaha was ruled by Anjan Shakya. In between the two kingdoms was a big, dense and unused forest. King Anjan was married to Queen Yashodhara Shakya, said to be very beautiful.

King Anjan and Queen Yashodhara once had gone for a visit around the town. On her visit, the queen saw a beautiful garden made by a local merchant. After returning, the queen started saying that she wanted the same kind of garden for herself. Helpless, the king promised her to give her one. Then, he talked with the neighbouring king and got permission to make use of the unused forest land.

The king then commissioned the work to deforest and make a beautiful garden for the queen. He then named the garden “Rumbini” after the queen, who was also called Rumbini Devi. Because people pronounced ‘ra’ as ‘la’, the ‘Rumbini’ garden was also known as ‘Lumbini’ garden, and it got stuck with time, without the correction.

Before any auspicious work, people then were known to do puja (holy ritual) wishing for prosperity and longevity. To inaugurate the garden, the king consulted the then rajpurohit (royal priest) Kaal Deva Rishi for an auspicious occasion. However, the purohit concluded there was no auspicious time according to the calendar they were using. Then and there, on the Chaitra Shukla Paksha Pratipada (the first day of the waxing moon), the king introduced a new calendar after consulting the purohit. This new calendar system was named Anjan Sambat.

Currently, it is the 2,711th year as per the Anjan Sambat system.

About 17 years ago, Swastiratna Shakya, who is a local priest and artist, came to know about the existence of this lost, ancient calendar system in a book ‘Kapilvastuko Ruprekha’ by Bajrananda Bajracharya (1972). After that, Shakya realised the Newari community had a much longer history and what the community celebrates today as Nhu Da (New Year) every year on the fourth day of Tihar is not the original New Year of the community.

Shakya, then, started educating and promoting this older calendar system. However, he is alone in the campaign until today. In Shakya’s experience, people have responded to his idea in two ways. They either tell him that he was mad to be doing so when no one really cared or that they appreciated the new information but not join him in his efforts.

Yet, Shakya views Newars should celebrate the true Nhu Da on Chaitra Shukla Pratipada, which falls on coming Chaitra 31 (April 13, 2021).

Every year, on various platforms, he has been advertising and educating people to let them know about the importance of the older calendar system. “People know about Nepa(l) Sambat, January 1, Baisakh 1, but for the Nepami [people of Nepa(l)], Anjan Sambat or Maha Shakya Sambat is a local, and an older calendar system of our country. Nepa(l) Sambat has brought people together, with the concept of Nepa(l) Mandala, but if we are to celebrate the true history of the Nepami, we have to acknowledge the Anjan Sambat too.”

He continues, “Today, we highly consider the Gregorian calendar that came from the west, and Bikram Sambat that Indian King Bikramaaditya introduced while on a pilgrimage in Nepal. But, we have evidence of a calendar that has been introduced and developed in our own land and is a much older calendar in comparison to Nepa(l) Sambat started by Sankhadhar Sakhwa some 1,500 years later.” For him, if Newa(r) community want to be proud of themselves for being the oldest settlers of Nepa(l) and celebrate the old, rich history, they should start recognising the Anjan Sambat too.

Shakya clarifies that he is not proposing replacing a calendar system with another one. Nevertheless, he stresses, incorporating the Anjan Sambat in the calendar used today is essential to truly embrace the history and existence of Buddhism in Nepal.

It was the 68th year of Anjan Sambat (623 BC) that Siddhartha Shakya (better known as Shakyamuni Buddha or Gautam Budhha) was born to King Sudhhodhan and Queen Mayadevi (daughter of King Anjan and Queen Yashodhara) in the ‘Rumbini garden’. He achieved enlightenment in the 103rd year and died in the 148th year of the said calendar.

Shakya ponders that if the Anjan Sambat is to be rebranded or promoted with links to Budhha as Lumbini Sambat and as the calendar of Buddha’s grandfather, Anjan Shakya, it might garner more attention [even worldwide]. However, he still wants to continue paying homage to the one who started the said calendar.

According to Shakya, there are no cultural rituals directly associated with the celebration of Anjan Sambat, but he suggests that this calendar system has some links to the celebration of Paachahre and the Dya Lwakegu festival held in Ason every year on the Chaitra Shukla Paksha Pratipada (the first day of the waxing moon). In the ritual, three out of eight forms of Goddess Ajima (Kanga Ajima of Yetkha, Lumri Ajima of Wotu, and Lumri Ajima of Tebahal) placed around the Kathmandu are brought together. Goddess Ajima is considered as the protector of the land and the children. And, it makes sense that, on every new year, the festival is marked to celebrate the glory of those who protect people.

He also says that this festival is also called Asa: ya (festival of Anjan Sambat). In fact, he adds, Ason was originally called Asa: (in Newari language) and it got its name (“A” and “Sa:” for Anjan Sambat) as the place where the new year was celebrated.

Likewise, some ancient Buddhist scriptures have mentioned the calendar, according to him. It is also mentioned in books from the modern times as well including ‘Nepali Sanskriti’ by Bala Chandra Sharma (1963), ‘Kapilvastuko Ruprekha’ by Bajranandra Bajracharya (1972), ‘Karma Ra Manushya’ by Mahashi Dharmakathik (1997), and many other articles too.

In ancient times, people used to draw lines on walls to count the days while others used the increasing and decreasing size of the moon to determine the days. Compared to the sun, the moon cycle was easier to remember and keep track of the days, thanks to its ever-changing size. That is why there are more lunar calendars in the world.

Anjan Sambat is a calendar system that also follows the lunar cycle for its counts of days. As per the lunar cycle, one complete year has 354 days with 12 months. And, every three years, the calendar gets the 13th month {Analaa in Nepa(l) Bhasa} totalling the year to 384 days. This is the same system followed by other lunar calendars, even Nepa(l) Sambat. Anjan Sambat shares the same lunar cycle and respective tithis that Nepa(l) Sambat uses today.

People, then, also had strong beliefs on tantric rituals and the faith on virtues and sins guided by astrology. In astrology, lunar days and its effects decide auspicious times to do good deeds, earn punya (virtues), and repent of sins.

Shakya adds, “Calendars in ancient Nepal were more popularly used to count the days and years of the king’s reign. It is said there used to be another older calendar system called Shakya Sambat or Kunja Sambat, which came into existence after a Shakya king was appointed unanimously or with a majority. When Anjan Sambat was introduced, it is said the older calendar was in its 8,640th year.” If you go by the older calendar mentioned by Shakya, it would account this year as the 11,351st year.

“However, we cannot find enough evidence to prove its existence or introduction. So, for now, to embrace our older and original calendar system, we have to start by acknowledging the Anjan Sambat,” Shakya concludes. 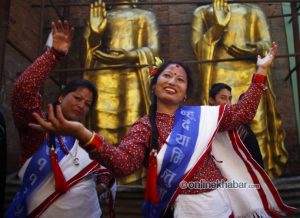