Local elections: Voting underway peacefully in general except for some sporadic cases of violence Women waiting in line for the voting in the local elections, in Kathmandu, on Friday, May 13, 2022.

Voting is underway across Nepal on Friday as a part of the local elections 2022. However, voting has been delayed and postponed in a few places due to cases of minor violence.

According to reports, voting has been halted at a voting booth in Devtal rural municipality-7 of the Bara district after a clash ensued. One person has been injured in the clash.

In a similar incident at a voting centre in Mahadevsthan, Chankheli rural municipality-2 of the Humla district.

The centre’s voting officer Krishna Prasad Acharya and another person have sustained injuries in the incident.

Voting in Baiteshwar rural municipality in Dolakha has been halted after tension broke out at the polling stations.

In ward number 1 of Jaya Prithvi municipality in Bajhang, police have stopped voting after a suspected IED was found near the polling station. Even though Nepal Army has taken control of the suspected IED, there are more similar things, report sources from the area.

In other places, however, voting during the local elections has been peaceful so far, according to the reports.

The Election Commission says the voting began at 7 am today and lasts until 5 in the afternoon. 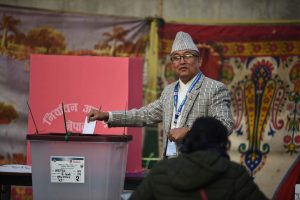