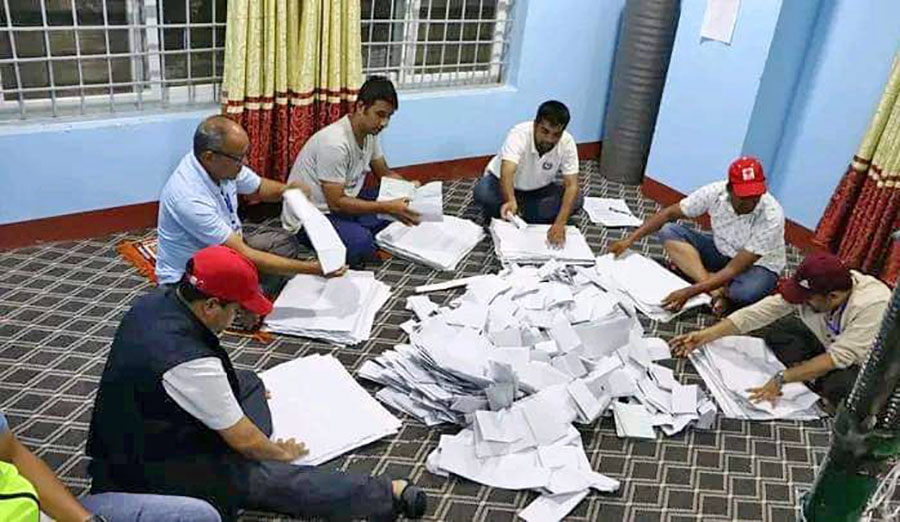 Vote count is underway in Dang for the local elections, in May 2022.

Election officials in most of the local units that held local elections on Friday have begun counting the votes by Saturday morning.

While a few local governments in the less populated districts of Manang and Mustang have already completed the count, other places have appeared quite slow.

As the vote count progresses, the two biggest parties–Nepali Congress and CPN-UML–are leading in most places. Besides the CPN-Maoist Centre, CPN-Unified Socialist, Janata Samajbadi Party Nepal and Loktantrik Samajbadi Party Nepal, the royalist Rastriya Prajatantra Party is also closely following these forces in a few places.

Likewise, in some key local units, independent candidates who had revolted against their party’s decisions to partner with other parties have taken the lead. These include Manoj Sah in Janakpur (Dhanusha) and Bidur Basnet in Dhulikhel (Kavre). Both the Nepali Congress supporters had contested independently against their party’s decision to form an alliance and give the mayoral position to other parties.

Meanwhile, the vote count for local elections is yet to begin in the Kathmandu metropolitan city. Independent candidate Balendra Shah aka Balen is projected to steal the limelight here.