Water-induced disasters are on the rise globally and in Nepal. Every year, there is a toll of deaths, injuries, property losses, and disturbances in natural and human ecosystems. Communities living in flood and landslide-prone areas are highly vulnerable when there is prolonged precipitation for days or weeks. According to the data from the Ministry of Home Affairs (MoHA) and Disaster Preparedness Network-Nepal, flood is the second most recurrent hazard preceded by fire and followed by epidemic and landslide in Nepal.

In the past 10 years, Nepal has recorded 4,500 cases of landslides, flash floods, avalanches and heavy rainfall incidents, in which a total of 1,952 people have lost their lives. Estimations show that a large amount of property has been either damaged or destroyed. In 2020 only, there has been a huge loss of lives and damage of property and crops due to floods and landslides.

As of June 24, the MoHA reported 132 deaths, 53 disappearances, and 128 injuries in 445 flooding and landslide incidents. According to the Nepal Red Cross Society’s situation report, as of July 30, 15,307 families (76,535 people) have been affected in various districts and 7,106 families (35,530 people) have been displaced. By September, the death rate has amplified more than double.

Although these six layers of institutional arrangements are considered milestones for addressing disasters, they still seem to be lagging behind in terms of becoming functional, actually reducing disaster risks beforehand disasters and making smooth responses during and post-disaster situations. Many of these bodies have not been able to get their full shapes until today. Major state institutions seem to be ignoring the roles of these institutions by strengthening them. Rather, top-level state institutions are quick to create new ad-hoc institutions to address disasters and the burning example of it is the ad-hoc establishment of High-Level Coordination Committee for Prevention and Control of Covid-19 also known as CCMC (Covid-19 Control Management Centre).

Evidence from the past, from Gorkha and Sindhupalchok among others, strongly suggests that the distribution of a packet of noodle in the name of food aid and providing computer hardware training in the name of job-oriented skills to farmers are UTTERLY failed initiatives although the institutions who engaged in such activities claim great achievements and successes in their own reports for national and international consumptions. An amalgamation of conventional and professional disaster response approaches and incorporating historically built and readily available local knowledge system would help achieve goals of sustainable development. For that, local knowledge should be understood and appreciated.

However, despite some recognition of the catalyst role of the indigenous knowledge in reducing the risk of disasters and adapting to climate change, this knowledge has not featured prominently in any of the existing disaster policies and disaster science. Instead, most of the disaster risk reduction practitioners, humanitarian organisations, and the government institutions still seem to be doubtful of indigenous knowledge and its relevance and effectiveness for disaster risk reduction and management because of the biased mindset in understanding it as being closed, emotional, parochial, unintellectual, unscientific and primitive.

What is science and what is ‘non-science’ is important here. If science means an intellectual and practical activity encompassing the systematic study of the structure and behaviour of the physical and natural world through observation and experiment, communities’ practical experiment, experience and observation from centuries to centuries and decades to decades cannot be less scientific.

Evidence, recurrently, suggests that communities which have a tremendous amount of indigenous knowledge and information on disaster risk reductions and management have been able to deal with various disasters with a minimum level of external support and guidance. Local people have an abundance of experience and comprehension relating to their local environment and the impacts of potential disasters on them. They have been consolidating their knowledge system on local environment and disasters for long, and this knowledge system can be relied upon to help their communities plan for and better manage disasters in order to reduce the risk and disaster impacts.

Several studies have indicated how communities using their indigenous knowledge have been able to significantly minimise the hazard risks including flood vulnerability during the monsoon. For example, by using indigenous knowledge, communities build organic dams instead of concrete dams, which can save fertile land to support a higher level of agricultural production and flood protection. They also build two-storey houses using mud, wood, bamboo etc, keeping the ground floor open to let the floodwater flow and remain safe upstairs during the flood. They build grain stores in hanging manners to keep maize, cucumber, pumpkin, ginger, garlic etc on trees or on the top of houses. They manufacture home-made flood protective swimming gears from easily available plastic bottles, gallons, and locally available water pots (gagris) instead of using costly and short-lasting modern life jackets.

These are a few best examples drawn from indigenous knowledge system. However, such invaluable and very relevant knowledge of local people, their skills, experiences, resources, and techniques have not been incorporated in the mainstream knowledge of disaster management, rather the highest level of focus is placed on external resources, ideas, and techniques for disaster situations. Hence, a timely, effective and successful model of DRR does not only incorporate the so-called scientific knowledge and understanding but also indigenously scientific knowledge for disaster planning and DRR. Such an amalgamation of the modern and indigenous knowledge for a holistic approach can ensure disaster safety and security of the communities. 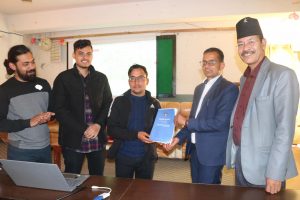 These youth made some cities localise DRRM tools. Now, they want to expand it across Nepal