Flight services have been affected due to rain in various parts of the country.

According to an official at the Tribhuvan International Airport, flights to Biratnagar, Bhairahawa, Dhangadhi, Pokhara, Surkhet and Tumlingtar have been affected today.

He said flights are being operated at Tribhuvan International Airport through an equipment-based system. Other airports in the country are open.

The monsoon is in full effect in Nepal currently. According to the Department of Hydrology and Metrology, monsoon clouds have entered through the east and says high rainfall is expected until Thursday. 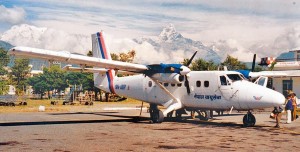