A team of eight icefall doctors has reached the Everest base camp to prepare the route for mountaineers to the summit of Sagarmatha (Everest) to facilitate the climbing this spring season.

A team led by Angsarki Sherpa, an icefall doctor who has been active in route construction for a long time, has reached the base camp. The team left Namche for the base camp on March 12 and will start the work after paying homage at the Pangboche monastery and determining the auspicious hour with the guidance of a Lama, says the Sagarmatha Pollution Control Committee (SPCC) vice-chairman Lama Kaji Sherpa.

According to the Khumbu Pasanglamu rural municipality, more than 100 domestic and foreign tourists visit the Khumbu area daily. 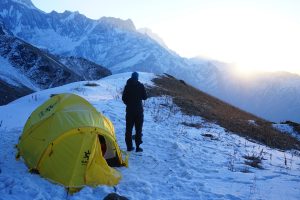