While the Election Commission has already begun the final preparations for the local elections scheduled for May 14, the government still seems to be thinking of revising the number of civic bodies and holding elections in two phases. It recently registered a Constitution amendment bill in Parliament with the hope that agitating Madhesi parties would agree to contest elections. A task force has been formed under the leadership of Deputy Prime Minister Kamal Thapa to look at the possibility of holding local elections in the Tarai region at a later date.

But, Election Commissioner Ishwari Prasad Paudel has told Onlinekhabar that the Commission will neither wait for Parliament to endorse the amendment nor the government to decide to conduct polling in phases.

The government is toying with the idea of reviewing the number of civic bodies. Will this have a bearing on the commission’s preparations for May 14?

The government has made a proposal to increase the number of civic bodies, and it has also filed a Constitution amendment bill in Parliament accordingly. The House is yet to endorse the bill. It will take time for the bill to be enacted by the President after Parliament endorses it.

It seems the amendment plan is meant to reach an understanding with agitating political parties. It is not meant for the upcoming polls.

If the proposal’s objective was other than bringing agitating parties to the election process, why would the government register it right now?

It takes 120 days for the Election Commission to prepare for any election. The government gave us just 83 days this time. Now, we only have a month left. Parliament convenes on April 20. The House will surely take quite a long time to discuss the amendment proposal and endorse it. Therefore, the commission has understood that the amendment is not meant for the May 14 elections.

Constitution amendment is just a regular process and the government has been taking it ahead accordingly. As the government has decided to hold local level elections in a single phase on May 14, the recent proposal does not have any effect on the election preparations.

But, haven’t you heard the Prime Minister say the polls can be held in two phases after revising the local level structures and updating the voters’ list if the Madhesi Front agrees?

I do not know why the Prime Minister said so and to whom he did it. The commission is very clear on its plan to hold the elections in one go on May 14.

What if the government directs you for the two phases?

Any such directive would not mean anything given that the decision has already been taken to go for a single-phase election. The date has already been announced. The commission does not know anything beyond that.

What if the task force formed by the Cabinet decides to revise the number and boundaries of local levels?

Please do not worry about the remarks by the Prime Minister or the Deputy Prime Minister unless what they say is published in the government’s gazette.

So, doesn’t such decision pose any challenge to the commission?

So a two-phase election is entirely impossible?

Rest assured that the polls will not go the second phase. There is no any reason to doubt the polls will take place. The Election Commission has not been affected by recent developments. 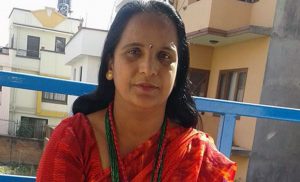 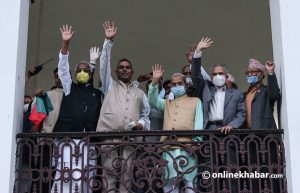 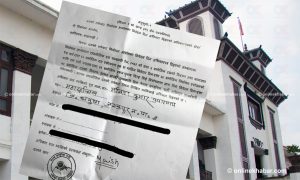